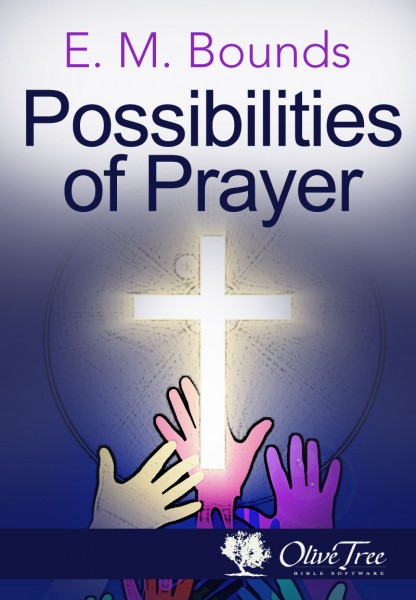 The Possibilities of Prayer are as vast as the promises of God and as limitless as God's power to fulfill those promises. In this eBook, one of eight books on prayer by E. M. Bounds, the author explores this great subject in sixteen chapters. "The Ministry of Prayer," "Prayer and the Promises," "Prayer - Its Possibilities," "Prayer - Its Wide Range," and "Prayer and Divine Providence" are a few of the chapter titles. "How vast," says Bounds,

"are the possibilities of prayer! How wide its reach! What great things are accomplished by this divinely appointed means of grace! It lays its hand on Almighty God and moves Him to do what He would not otherwise do if prayer was not offered. It brings things to pass which would never otherwise occur. The story of prayer is the story of great achievements. Prayer is a wonderful poser placed by Almighty God in the hands of His saints, which may be used to accomplish great purposes and to achieve unusual results."

Here is a book that will deeply impress readers with the opportunity to turn possibilities into actualities by bringing the needs of a dying world to the throne of Grace. Few authors write about prayer with the conviction and authority of E. M. Bounds.

One who knew this author personally testified that everything Bounds wrote was for the salvation of his readers. The weight, the gravity, the conviction with which E. M. Bounds speaks on prayer make this and all his books a treasure for those who want to know God as he did.