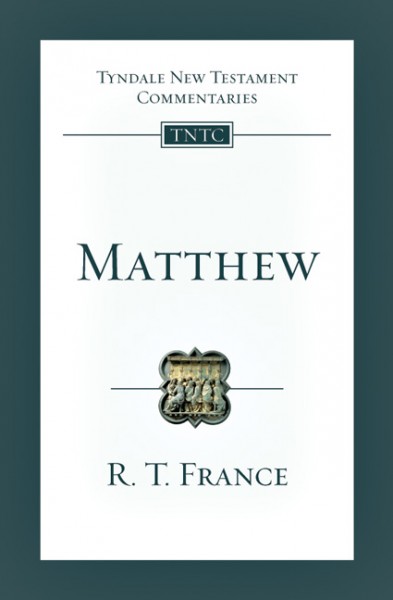 The visit of the Magi, the Sermon on the Mount, the Great Commission: these are only a few of the well-known passages in Matthew's Gospel. Yet it begins with a list of unknown names and apparently irrelevant 'begettings'. The early church may have placed Matthew first in the New Testament because it provides a Christian perspective on the relation between the church and the Jews, an issue that is still important today. R. T. France tackles this and other key issues in the Gospel with clarity, reliability and relevance.

The Tyndale New Testament commentaries are designed to help the reader of the Bible understand what the text says and what it means. The Introduction to each book gives a concise but thorough treatment of its authorship, date, original setting and purpose. Following a structural Analysis, the Commentary takes the book section by section, drawing out its main themes, and also comments on individual verses and problems of interpretation. Additional Notes provide fuller discussion of particular difficulties. The goal throughout is to explain the true meaning of the Bible and make its message plain.

"There simply is no series of medium-length commentaries that approaches the excellence of the Tyndale commentaries." — Donald A. Hagner, Fuller Theological Seminary R. T. France has taught at London Bible College and was principal of Wycliffe Hall, Oxford, from 1989 to 1995. He has also been the rector of seven Anglican parishes. He is the author of Matthew in the Tyndale New Testament Commentary series, The Evidence for Jesus, Matthew: Evangelist and Teacher, two volumes of Mark in both the Doubleday Bible Commentary and the New International Greek Testament Commentary, and Women in the Church's Ministry: A Test Case for Biblical Hermeneutics.
ISBN: 9780830842315