Postmodern Times: A Christian Guide to Contemporary Thought and Culture 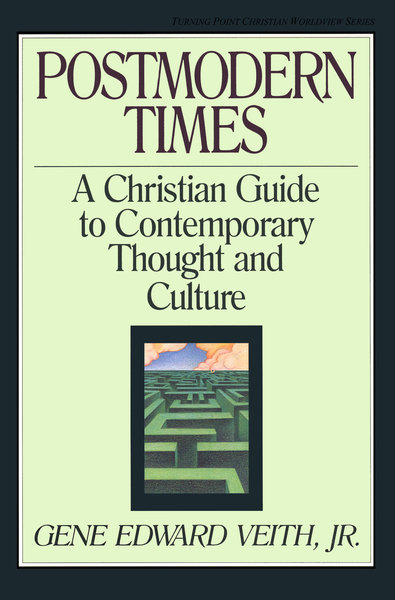 Postmodern Times: A Christian Guide to Contemporary Thought and Culture

The modern era is over. Assumptions that shaped twentieth-century thought and culture, the bridges we crossed to this present moment, have blown up. The postmodern age has begun.

Just what is postmodernism? The average person would be shocked by its creed: Truth, meaning, and individual identity do not exist. These are social constructs. Human life has no special significance, no more value than animal or plant life. All social relationships, all institutions, all moral values are expressions and masks of the primal will to power.

Alarmingly, these ideas have gripped the nation's universities, which turn out today's lawyers, judges, writers, journalists, teachers, and other culture-shapers. Through society's influences, postmodernist ideas have seeped into films, television, art, literature, politics; and, without his knowing it, into the head of the average person on the street.

Christ has called us to proclaim the gospel to a culture grappling with postmodernism. We must understand our times. Then, through the power that Christ gives, we can counter the prevailing culture and proclaim His sufficiency to our society's very points of need.

"While pundits wring their hands over the radicalism of political correctness, speech codes, and outrageous art, Gene Edward Veith takes unerring aim at the intellectual roots of it all. The most important book for anyone who wants to know what's behind the political correctness movement." --Chuck Colson, founder, Prison Fellowship

"An ideal guide for Christians who don't want to be like the notorious military strategist preparing to fight the last war instead of the next one." --Herbert Schlossberg, author, Idols for Destruction

"Pinpoints the strengths and weaknesses of postmodern thought and points the way for Christians to take advantage of both." --E. Calvin Beisner, Covenant College