Color of Rain: How Two Families Found Faith, Hope, and Love in the Midst of Tragedy - Olive Tree Bible Software

Color of Rain: How Two Families Found Faith, Hope, and Love in the Midst of Tragedy 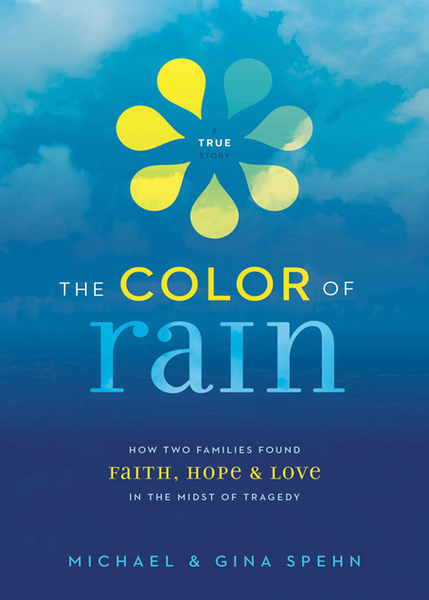 Color of Rain: How Two Families Found Faith, Hope, and Love in the Midst of Tragedy

Title: Color of Rain: How Two Families Found Faith, Hope, and Love in the Midst of Tragedy

When unexpected grief brings two families together, how do they start their journey to healing? Join Michael and Gina Spehn--bestselling authors and founders of the New Day Foundation--as they tell their story of resilience, remembrance, and reliance on their shared faith.

Matt Kell and Cathy Spehn had known each other since grade school. As adults, they each got married, lived in their hometown, and attended the same church. Their kids even attended school together.

Matt died at home on Christmas Day after a three-year battle with cancer, leaving behind his wife, Gina, and two young boys. After attending Matt's inspirational funeral and reaching out to Gina with offers of support, Cathy was diagnosed with inoperable brain cancer. She died only 17 days later, leaving behind her husband, Michael, and three young children. In her final hours, Cathy instructed Michael to call Gina Kell.

The Color of Rain illuminates the stepping stones of loss and healing that ultimately led to a joyful new life for Michael, Gina, and their five children. Their path to becoming a modern-day Brady Bunch was paved with grief, laughter, and the willingness to be restored to a new and even better life despite the inevitable resistance they faced.

As you learn more about Michael and Gina's story, you'll learn:

As their dual first-person narrative reveals what it is like to walk through loss and love simultaneously, you'll have an intimate look at how Michael and Gina lived, lost, and ultimately persevered through extraordinary circumstances.

Praise for The Color of Rain:

"The Color of Rain is a testament to God's restoration and grace. Even in our suffering, there is beauty. It rarely makes sense, but it's always true: 'He makes all things beautiful, in His time.'"

"Michael and Gina Spehn's The Color of Rain is not only an instant bestseller but also an instant classic, certain to be pressed into the hands of hundreds of thousands of grieving men and women by their closest friends, for it is a book that is painfully honest about the depths of sorrow but also full of the joy of the hard path back from near despair. It is another reminder that God is there, however dark the day, and that he will comfort those who call on him."