Reminiscences of an Octogenarian 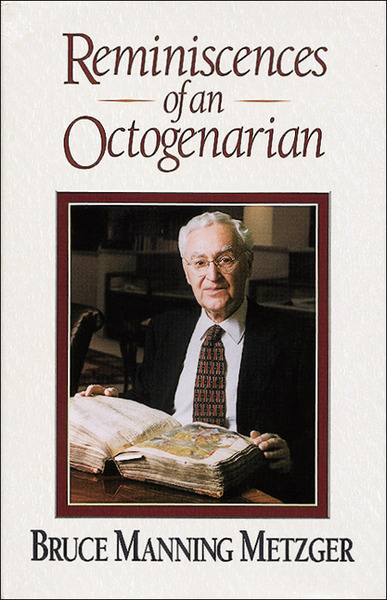 Reminiscences of an Octogenarian

Title: Reminiscences of an Octogenarian

Bruce Manning Metzger's memoirs trace his life from his childhood in the Pennsylvania Dutch country and his student years at Princeton through his distinguished career of teaching, writing, lecturing, and editing. Professor Metzger's work has won him the gratitude of both biblical scholars and the larger Bible-reading public. His text-critical work on the New Testament is reflected in the standard Greek text now used and appreciated by scholars worldwide. His efforts on the Revised Standard and New Revised Standard versions of the Bible helped produce the readable, accurate English translations used for study and devotion by so many. His work on The Reader's Digest Bible and The Oxford Companion to the Bible has made the Bible more accessible for an untold number of readers.

In these memoirs, Professor Metzger's own words put a human face on his monumental scholarly achievements. The wide array of stories and vignettes--from Senator Joseph McCarthy's attack on RSV committee members and Metzger's audiences with the pope to the time Professor Metzger and other members of the NRSV committee had to crawl out of a library window to get to their dinner--offer the reader a personal insight into some of the twentieth century's crucial developments in the text and translation of the Bible.
ISBN: 9781441241818