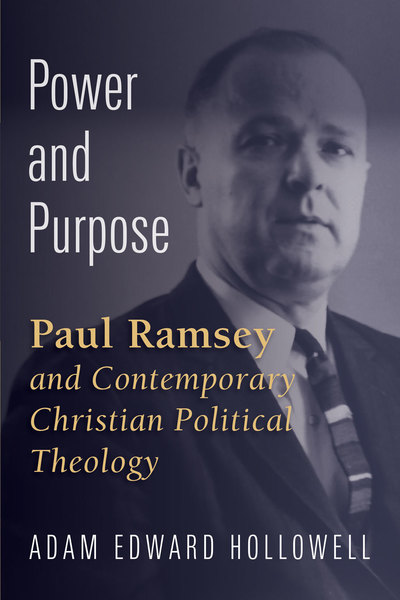 Not long ago, Paul Ramsey (1913-1988) was a leading voice in North American Christian ethics. Today, however, his intellectual legacy is in question, and his work is largely ignored by current scholars in the field. Against the tide of that neglect, Adam Edward Hollowell argues in Power and Purpose that Ramsey's work can still yield considerable insight for contemporary Christian political theology.

Hollowell shows the influences of Jean-Jacques Rousseau and Karl Barth on Ramsey's early work; discusses his conversations with political theologians of his generation, including Reinhold and Richard Niebuhr and Joseph Fletcher; considers his influence on the early virtue theory of Jean Porter and Oliver O'Donovan; and places Ramsey's work in conversation with more recent voices in Christian ethics, including John Bowlin, Jennifer Herdt, Charles Mathewes, Eric Gregory, and Daniel Bell. Hollowell thus forges new connections between Ramsey and contemporary debates in political theology on such issues as political authority, power, just war, and torture.

Hollowell's Power and Purpose also revisits well-known aspects of Ramsey's work -- for example, his insistence on the political significance of God's covenant with creation -- and offers an original account of the role of judgment in his theology of repentance. The book dedicates considerable attention to Ramsey's description of practical reasoning and highlights his commitment to the virtues, especially prudence. This accessible introduction to Paul Ramsey will appeal to a wide swath of scholars and students in Christian ethics and political theology.
ISBN: 9781467443043