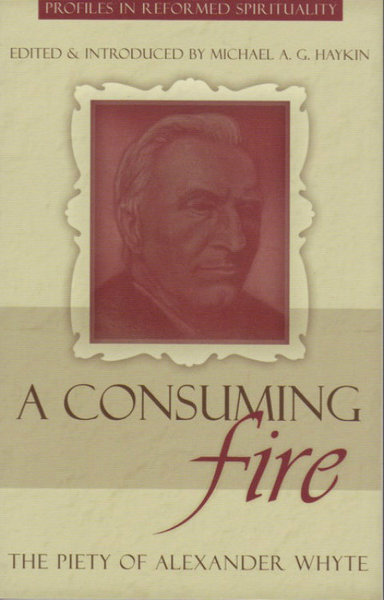 Title: A Consuming Fire: The Piety of Alexander Whyte

Michael A. G. Haykin provides an excellent primer on Reformed Evangelical spirituality by opening a window to the life and work of Alexander Whyte. Haykin's biographical essay introduces the reader to Whyte and to the high premium he placed on vibrant Christianity. The remainder of the book presents 28 selections from various written works by Whyte that display his burning zeal for the devoted life. For those who are not familiar with Whyte but interested in acquainting themselves with him and the spirituality of the Reformed tradition, this book will make a reliable introduction.A Consuming Fire is the first book in a series called Profiles in Reformed Spirituality, being co-edited by Joel R. Beeke and Michael A.G. Haykin. This series is designed to introduce the spirituality and piety of the Reformed tradition by presenting descriptions of the lives of notable Christians with select passages from their works. This combination of biographical sketches and collected portions from primary sources gives a taste of the treated subjects’ contribution to our spiritual heritage and some direction as to how the reader can find further edification through their works.

"Michael Haykin's A Consuming Fire is a splendid 'warts and all' cameo portrait of the remarkable Dr. Alexander Whyte. The moving story of how an illegitimate child became a pulpit prince is told here with the skill of a historian and the sensitivity of a fellow Christian. The wonderful selection of passages from Whyte's works is itself worth the price of the book!" - Sinclair B. Ferguson