Devoted to the Service of the Temple - Olive Tree Bible Software 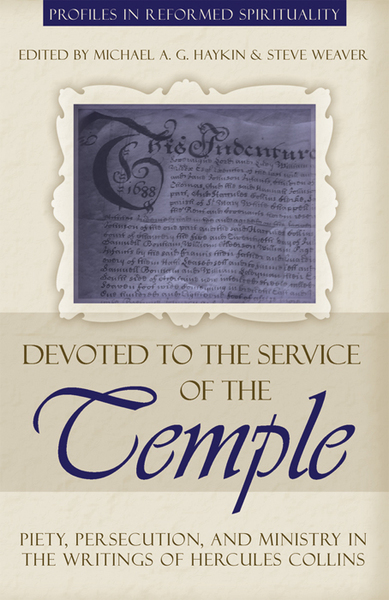 Title: Devoted to the Service of the Temple

While largely forgotten in modern times, Hercules Collins (1646/1702) was highly influential among the late 17th and early 18th century Calvinistic Baptists of London. Through a biographical sketch and 35 sample selections collected from Collin's writings, Michael A.G. Haykin and Stee Weaver introduce us to the vibrant spirituality of this colossal figure. "Hercules Collins is one of the great figures from our Baptist heritage - a heritage who suffered much for the cause of Christ and left a great legacy for generations that followed. There is something especially compelling about the witness of a man who was oppressed and imprisoned for his faith in our Lord Jesus Christ. The witness of Hercules Collins as pastor, prisoner, and preacher is worthy of the closest attention in our own times. We are indebted to Michael Haykin and Steve Weaver for bringing Hercules Collins to life for a new generation." - R. Albert Mohler, Jr.
ISBN: 9781601783967