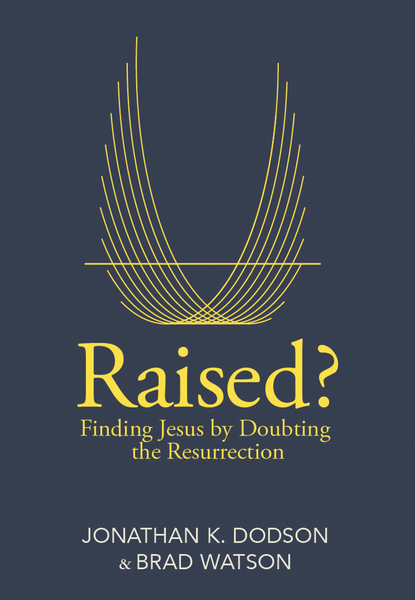 Did Jesus really beat death? That’s what Christians for hundreds of years have believed, that Jesus Christ returned to life after death and burial in a stone tomb. To the modern mind, “resurrection” is utterly implausible, but it was also doubtful to many first-century Greeks, Jews, and even some Christians. With such an incredible assertion at the heart of the Christian faith, it’s no wonder that some people struggle to believe.

Unlike any other book on the resurrection, Raised? encourages you to doubt in order to believe. Too often Christians look down on doubt, but in Christ, we see a person who welcomes doubt and encourages faith. Jonathan Dodson and Brad Watson don’t shy away from the hard questions or settle for easy answers. They help you to see how the resurrection offers hope for the future and answers for the life and death questions we all face.

“I encourage Christians and non-Christians alike to read this book. . . . provocative, illuminating, and succinct.”

—Eileen Flynn, former religion reporter for Austin American-Statesman and Journalism and religion lecturer at the University of Texas

“Wonderfully demonstrates the plausibility of the resurrection of Jesus and the possibilities for a life of hope.”

—Sean McDonough, professor of New Testament at Gordon-Conwell Theological Seminary and author of Christ as Creator: Origins of a New Testament Doctrine