Impact Player: Leaving a Lasting Legacy On and Off the Field - Olive Tree Bible Software 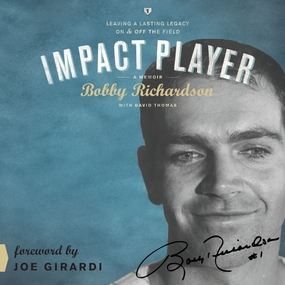 Title: Impact Player: Leaving a Lasting Legacy On and Off the Field

"I want to thank the good Lord for making me a Yankee." —Bobby Richardson. Bobby Richardson played alongside Mickey Mantle, Roger Maris, Whitey Ford, Moose Skowron, and Yogi Berra during one of the greatest dynasties in baseball history, and he remains to this day the only player from a losing team ever to be named World Series MVP. Impact Player chronicles Bobby’s life story — from his early days playing American Legion ball in South Carolina through his storied career with the Yankee’s and his decision to walk away from the game in his prime. He shares never-before-told tales from the Yankees clubhouse during the historic ‘55–‘64 pennant runs, and he speaks candidly about the unlikely friendship this devout, clean-cut Christian shared with the fast-and-hard-living Mickey Mantle — a friendship that lasted for decades and would ultimately change the lives of these former teammates forever. The perfect combination of faith and baseball, Impact Player is a must-listen for baseball fans and historians of all ages. It not only offers a rare glimpse into one of those most celebrated dynasties in the history of the game but also paints a fascinating portrait of a life well lived and portrays the lasting rewards that come from knowing and loving God.
ISBN: 9781621881018