Why I Am Catholic: (and You Should Be Too) - Olive Tree Bible Software

Why I Am Catholic: (and You Should Be Too) 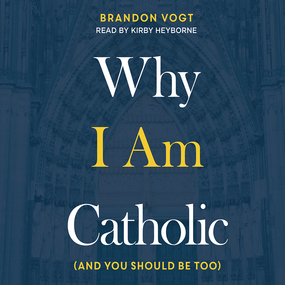 Why I Am Catholic: (and You Should Be Too)

Title: Why I Am Catholic: (and You Should Be Too)

With atheism on the rise and millions tossing off religion, why would anyone consider the Catholic Church? Brandon Vogt, a bestselling author and the content director for Bishop Robert Barron’s Word on Fire Catholic Ministries, shares his passionate search for truth, a journey that culminated in the realization that Catholicism was right about a lot of things, maybe even everything. His persuasive case for the faith reveals a vision of Catholicism that has answers our world desperately needs and reminds those already in the Church what they love about it.

A 2016 study by the Public Religion Research Institute found that 25 percent of adults (39 percent of young adults) describe themselves as unaffiliated with any religion. Millions of these so-called “nones” have fled organized religion and many more have rejected God altogether.

Brandon Vogt was one of those nones. When he converted to Catholicism in college, he knew how confusing that decision was to many of his friends and family. But he also knew that the evidence he discovered pointed to one conclusion: Catholicism is true. To his delight, he discovered it was also exceedingly good and beautiful.

Why I Am Catholic traces Vogt’s spiritual journey, making a refreshing, twenty-first century case for the faith and answering questions being asked by agnostics, nones, and atheists, the audience for his popular website, StrangeNotions.com, where Catholics and atheists dialogue. With references to Catholic thinkers such as G. K. Chesterton, Ven. Fulton Sheen, St. Teresa of Calcutta, and Bishop Robert Barron, Vogt draws together lines of evidence to help seekers discover why they should be Catholic as an alternative.

Why I Am Catholic serves as a compelling reproposal of the Church for former Catholics, a persuasive argument for truth and beauty to those who have become jaded and disenchanted with religion, and at the same time offers practicing Catholics a much-needed dose of confidence and clarity to affirm their faith against an increasingly skeptical culture.
ISBN: 9781545905760