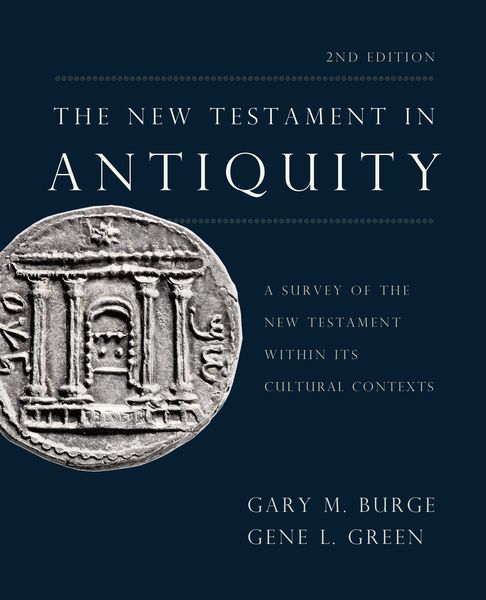 This completely revised and updated second edition of The New Testament in Antiquity skillfully develops how Jewish, Hellenistic, and Roman cultures formed the essential environment in which the New Testament authors wrote their books and letters. Understanding of the land, history, and culture of the ancient world brings remarkable new insights into how we read the New Testament itself.

Throughout the book, numerous features provide windows into the first-century world. Nearly 500 full color photos, charts, maps, and drawings have been carefully selected. Additional features include sidebars that integrate the book's material with issues of interpretation, discussion questions, and bibliographies.

Gary M. Burge (PhD, King's College, Aberdeen University) is visiting professor of New Testament at Calvin Theological Seminary. Gary has authored a number of books, including Who Are God’s People in the Middle East? What Christians Are Not Being Told About Israel and the Palestinians; John and Letters of John in the NIV Application Commentary series; The New Testament in Antiquity (coauthored with Gene Green); and the first three volumes in the Ancient Context, Ancient Faith series: The Bible and the Land, Jesus, the Middle Eastern Storyteller, and Encounters with Jesus. Gary specializes in the Middle East, its churches, and its history in the Hellenistic period.

Gene L. Green (PhD, Kings College, Aberdeen University) professor of New Testament at Wheaton College and Graduate School. Before coming to Wheaton in 1996, he served for over a decade as professor of New Testament as well as Academic Dean and Rector of the Seminario ESEPA in San José, Costa Rica. He is the author of two commentaries in Spanish, 1 Pedro y 2 Pedro (Caribe) and 1 y 2 Tesalonicenses (Portavoz), and English commentaries on 1 and 2 Thessalonians (Pillar Series, Eerdmans) and 2 Peter and Jude (BECNT, Baker). His special research interest is the intersection of the Christian faith and cultures, both ancient and contemporary. Gene has pastored and taught in churches in the United States and Latin America since 1972. He also serves on the board of John Stott Ministries.