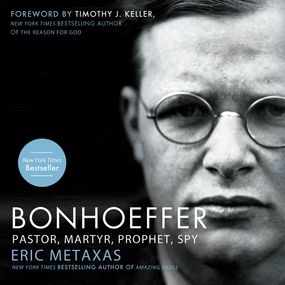 Who better to face the greatest evil of the 20th century than a humble man of faith?

As Adolf Hitler and the Nazis seduced a nation, bullied a continent, and attempted to exterminate the Jews of Europe, a small number of dissidents and saboteurs worked to dismantle the Third Reich from the inside. One of these was Dietrich Bonhoeffer, a pastor and author.

In this New York Times bestselling biography, Eric Metaxas takes both strands of Bonhoeffer's life--the theologian and the spy--and draws them together to tell a searing story of incredible moral courage in the face of monstrous evil.

In Bonhoeffer, Metaxas presents the fullest account of Bonhoeffer's life, including his:

This edition, revised and with a new introduction from the author, shares the deeply moving story through previously unavailable documents, including personal letters, detailed journal entries, and firsthand personal accounts to reveal never-before-seen dimensions of Bonhoeffer's life and work.

"Metaxas has created a biography of uncommon power--intelligent, moving, well researched, vividly written, and rich in implication for our own lives. Or to put it another way: Buy this book. Read it. Then buy another copy and give it to a person you love. It's that good." --Archbishop Charles Chaput, author, First Things

"Metaxas presents Bonhoeffer as a clear-headed, deeply convicted Christian who submitted to no one and nothing except God and his Word." --Christianity Today

"Metaxas has written a book that adds a new dimension to World War II, a new understanding of how evil can seize the soul of a nation and a man of faith can confront it." --Thomas Fleming, author, The New Dealers’ War