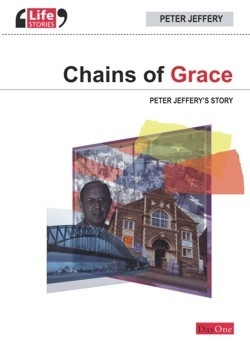 Overview Chains of grace, the story of Peter Jeffery, is an engaging and insightful account of how God took an ordinary man—who had little knowledge of the Bible— and converted him, even though the very day he was converted, he vowed these words: ‘I will never become a Christian!’ Commencing his ministry in Wales, he faced challenges and difficulties in his pastorate, but learnt to trust God in all circumstances. His faithful preaching of the Bible led to many people having their lives transformed, and the knock-on effect of God’s grace was often like the links of a chain, with one conversion leading to another. Peter’s ministry took him to many different parts of the world, including Australia and North America. His writings have been translated into various languages, and he has over forty books in print.

Enjoy reading all about how God took an ordinary man and used him as an instrument to build his church!

Author Peter Jeffery served as a minister for many years in Wales and England before engaging in an itinerant ministry of evangelism and preaching which has taken him to many parts of the world. He has a passion for sharing the gospel in clear terms and with vivid illustrations. He is author of some forty books, many of which are intended for new believers and those who are not yet mature in the Christian faith.

Endorsements I commend this easy-to-read journey of a man who found Jesus Christ and wants to tell others about him. Peter Jeffery has done that and still is doing it through this book and others. —Neville Rees (Retired Pastor, Morriston, Swansea, Wales)

Peter Jeffrey’s life is a tribute to the grace of God in Jesus Christ who saves sinners and presses them into service to build his Kingdom. We must pray that our gracious God will raise up an army of young men with Peter’s gifts. —Rev Steve Martin, Atlanta, Georgia