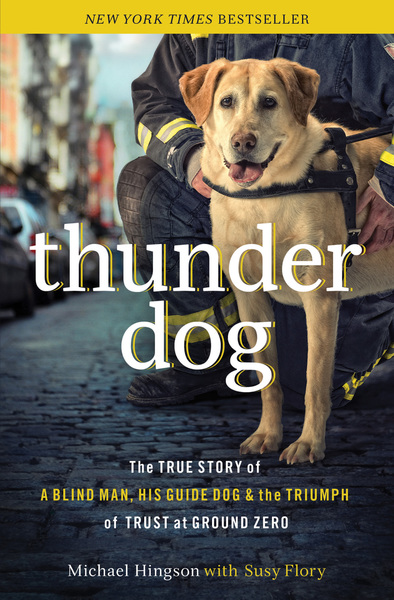 “I’m sorry,” the doctor said. “He is permanently and totally blind. There is nothing we can do for him.”

George and Sarah Hingson looked at each other, devastated. Their six-month-old son, Michael was a happy, strawberry blond baby boy, healthy and normal in every way except one. When the Hingsons switched on a light or made silly faces, Michael did not react. Ever. “My best suggestion is that you send him to a home for the blind,” the doctor continued. “He will never be able to do anything for himself.”

Forty-seven years later, a yellow Labrador retriever puppy was born in the whelping unit of Guide Dogs for the Blind in San Rafael, California. The puppy’s name was Roselle. On September 11, 2001, she saved Michael’s life. This is Roselle’s story too.

Every moment in Michael Hingson’s and Roselle’s lives seemed to lead up to this day. When one of four hijacked planes flew into the World Trade Center’s north tower on September 11, 2001, Michael Hingson, a district sales manager for a data protection and network security systems company, was sitting down for a meeting. His guide dog, Roselle, was at his feet. Paired for twenty-one months, man and dog spent that time forging a bond of trust, much like police partners who trust their lives to each other.

Michael couldn’t see a thing, but he could hear the sounds of shattering glass, falling debris, and terrified people flooding around him and Roselle. However, Roselle sat calmly beside him. In that moment, Michael chose to trust Roselle’s judgment and not to panic. They were a team.

Thunder Dog is a story that will forever change your spirit and your perspective. It illuminates Hingson’s lifelong determination to achieve parity in a sighted world and how the rare trust between a man and his guide dog can inspire an unshakable faith in each one of us.