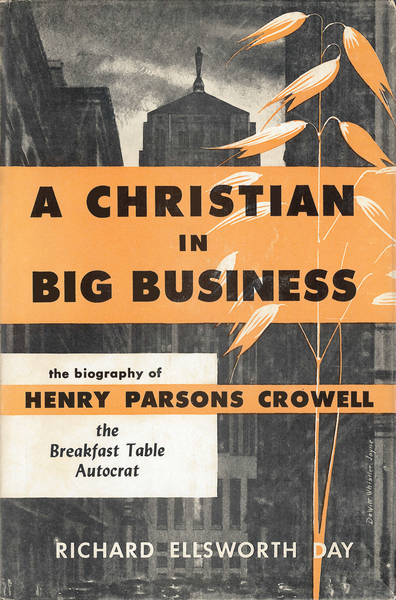 Title: A Christian in Big Business: The Biography of Henry Parsons Crowell, the Breakfast Table Autocrat

The Yankee temperament seems to be resultant of forces between shrewd bargaining and a genius for faith. Faith kept bargaining from becoming sordid, and bargaining kept faith from becoming gullible. You can’t help admiring these men. They were Puritans with a Mission Street education. They could deal with Scrooge to his disadvantage, and commune with Fenelon to his edification; yet neither function violated the other.

Henry Parsons Crowell was a Yankee from Cleveland. You will never measure the sagacity with which he reared great enterprises, or the devotion to his walk with God until you take time to look at his forebears—the Yankees from Connecticut.

The constant aplomb of Mr. Crowell indicates a Broadcloth Background. Among his forebears were American pioneers, judges, Yale students, army officers, early business and professional men. Added thereto were years of contacts with captains of industry, inventors, and artisans from Brooklyn to Saskatoon.

The most formative of all factors, however, was the unfeigned faith he had from a child. The family altars of his forebears, the Crowells and the Parsons, glow like air-beacons across the night clear back to Colonial Days. In his own time, Mr. Crowell’s fellowships were with the outstanding of all denominations: men committed to evangelical fervor, Trinitarian faith, and sound doctrine. All of the foregoing help explain his quiet power, sure touch, and unbroken equanimity.