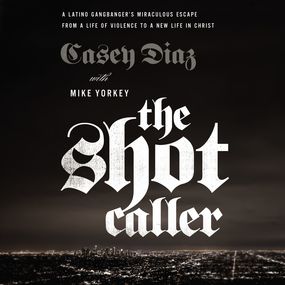 “This is a story of a tough young man who lost his way, and of a loving God who never forgot him, no matter where he was.” — Nicky Cruz, bestselling author of Run Baby Run

The son of El Salvadorian immigrants, Casey Diaz was brought to Los Angeles at the age of two. An abusive, impoverished family life propelled Casey at only eleven years of age into the Rockwood Street Locos gang. Casey was willing to do anything to be number one, but years of chasing rival gang members led to a dramatic ambush and arrest by the LAPD.

At just sixteen, Casey was sentenced to more than twelve years in solitary confinement in California’s toughest prison as one of the state’s most violent offenders. He thought his life was over.

Yet, when a determined elderly woman paid Casey a visit, a whole new world of possibilities began to unfold. Casey scoffed as she quietly insisted God was going to use him. As the days in solitary wore on, Casey realized Someone else was calling the shots. What happened next can only be described as a miracle.

A visceral insider’s look at the violent world of gangs and prison life, The Shot Caller is a remarkable demonstration of God’s reckless, unending grace and His desire to reach even the worst of sinners—no matter where they are.