Isobel Kuhn: On the Roof of the World - Olive Tree Bible Software

Isobel Kuhn: On the Roof of the World 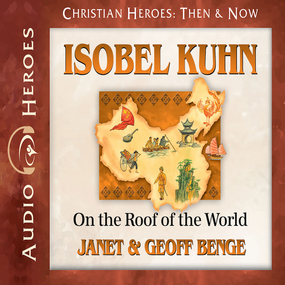 Isobel Kuhn: On the Roof of the World

Title: Isobel Kuhn: On the Roof of the World

A fellow missionary had said, “When you get to China, all the scum of your nature will rise to the top.” It surely had, mused Belle. The food, the fleas, the filth, the exhausting mountain paths, and so many other transitions to missionary life had tested her. But Belle had stayed at her post, and she was so glad that she had.

As a fourteen-year-old intent on living a “modern” life, the last thing Isobel Kuhn wanted to grow up to be was a missionary. But as it turned out, this young agnostic’s life was redirected—from crisis and doubt to hope and strength.

Convinced that God wanted her to preach the gospel as a China Inland missionary, Isobel bravely served among the Lisu people in remote mountainous regions of China and Thailand. After twenty years of ministry Isobel returned to the United States, writing stirring stories of faith and inspiring generations of readers. (1901–1957)

This best-selling, missionary biography series - Christian Heroes: Then & Now - chronicles the exciting, challenging, and deeply touching true stories of ordinary men and women whose trust in God accomplished extraordinary exploits for His kingdom and glory.
ISBN: 9781545902943