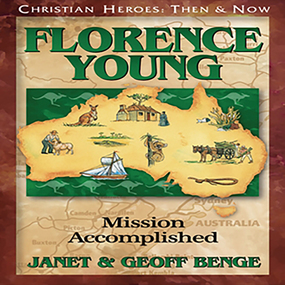 A rip current overturned the whaleboat with eight Kanaka Christians aboard. Only three of the men could swim, and the others clung to the upturned boat. Sharks circled the three as they struggled to get to shore. The three survived, but the others could not be found. When Florence heard the news, she resolved to go on despite the dangers.

Once timid and unsure of her own salvation, New Zealander Florence Young rose to her calling and became a fearless and faithful witness for Jesus Christ. Eventually serving in the remote Solomon Islands and, for a season, in China during the deadly Boxer Rebellion, Florence began her service close to home.

This one women's mission to the Solomon Islanders, or Kanakas, working on her family's Australian plantation soon expanded to their home islands. There, as Florence and others helped Kanaka believers reach out to villages steeped in cannibalism and revenge killings, thousands of people were transformed by the love of God. (1856-1940)
This best-selling, missionary biography series - Christian Heroes: Then & Now - chronicles the exciting, challenging, and deeply touching true stories of ordinary men and women whose trust in God accomplished extraordinary exploits for His kingdom and glory.
ISBN: 9781633898141