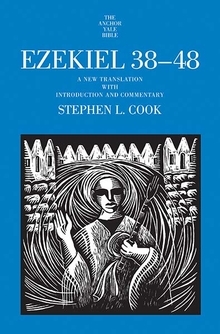 A fresh interpretation of the final major sections of the Hebrew book of Ezekiel, chapters 38-48.

Stephen L. Cook offers an accessible translation and interpretation of the final sections of Ezekiel. These chapters, the most challenging texts of scripture, describe the end-time assault of Gog of Magog on Israel and provide an incredible visionary tour of God’s utopian temple. Following the approach of Moshe Greenberg, the author of the preceding Anchor Yale Bible commentaries on Ezekiel, this volume grounds interpretation of the book in an intimate acquaintance with Ezekiel’s source materials, its particular patterns of composition and rhetoric, and the general learned, priestly workings of the Ezekiel school. The commentary honors Greenberg’s legacy by including insights from traditional Jewish commentators, such as Rashi, Kimhi, and Eliezer of Beaugency. In contrast to preceding commentaries, the book devotes special attention to the Zadokite idea of an indwelling, anthropomorphic “body” of God, and the enlivening effect on people and land of that indwelling.

The Anchor Yale Bible Commentary Series is a project of international and interfaith scope in which Protestant, Catholic, and Jewish scholars from many countries contribute individual volumes. The project is not sponsored by any ecclesiastical organization and is not intended to reflect any particular theological doctrine.

Stephen L. Cook is the Catherine N. McBurney Professor of Old Testament Language and Literature at Virginia Theological Seminary. He is the author of several books including The Social Roots of Biblical Yahwism; Prophecy and Apocalypticism; and Reading Deuteronomy.