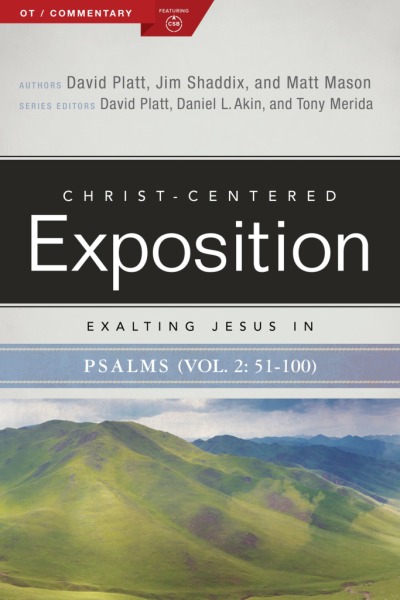 Working through the Psalms one by one, this resource provides tools for our understanding of how Christ is present in these ancient worship texts. The Psalms cover the gamut of emotions, and have a lesson to provide and an understanding to convey about any circumstance in which we might find ourselves.

Exalting Jesus in Psalms 51-100 is part of the Christ-Centered Exposition Commentary series edited by David Platt, Daniel L. Akin, and Tony Merida. All volumes take a Christ-centered approach to expositing the books of the Bible. Instead of a verse-by-verse approach, the authors explain and apply key passages, teaching readers to see Christ in all aspects of Scripture.

This product can be purchased individually, but is also available as part of the following sets:

Dr. David Platt, President of the International Mission Board, is deeply devoted to Christ and His Word. David’s first love in ministry is making disciples, sharing, showing, and teaching God’s Word in everyday life. He has traveled extensively to serve alongside church leaders throughout the United States and around the world. A life-long learner, David has earned two undergraduate and three advanced degrees. He holds a Bachelor of Arts (B.A.) and Bachelor of Arts in Journalism (A.B.J.) from the University of Georgia, and a Master of Divinity (M.Div.), Master of Theology (Th.M) and Doctor of Philosophy (Ph.D) from New Orleans Baptist Theological Seminary. He previously served at New Orleans Baptist Theological Seminary as Dean of Chapel and Assistant Professor of Expository Preaching and Apologetics, Staff Evangelist at Edgewater Baptist Church in New Orleans, and eight years as the Senior Pastor of The Church at Brook Hills in Birmingham, AL. David has written several books, Radical, Radical Together, Follow Me and most recently Counter Culture (to be released February 2015). He also has a radio program on Moody Radio, Radical with David Platt, that can be heard around the world and features past sermons and teaching from David’s ministry. David founded Radical (Radical.net), a ministry devoted to serving churches and disseminating disciple-making resources toward the end that the gospel might be made known in all nations. David and his wife Heather have four children, Caleb, Joshua, Mara Ruth, and Isaiah.

Jim Shaddix serves as Professor of Preaching at Southeastern Baptist Theological Seminary in Wake Forest, NC, occupying the W. A. Criswell Chair of Expository Preaching. He also serves as a Senior Fellow for the Center for Preaching and Pastoral Leadership, which exists to resource pastors in local churches. Jim has pastored churches in Texas, Mississippi, Louisiana and Colorado, and also served as Dean of the Chapel and Professor of Preaching at New Orleans Baptist Theological Seminary in New Orleans, LA. He is the author of The Passion Driven Sermon (Broadman & Holman, 2003), Decisional Preachingj (Rainer, 2019), and co-author of Power in the Pulpit (Moody, 1999, 2017) and Progress in the Pulpit (Moody, 2017), both with Jerry Vines, 2 Peter and Jude (Broadman & Holman, 2018) with Danny Akin, and Psalms 51-100 (Broadman & Holman, 2020) with David Platt and Matt Mason, both in the Christ-Centered Exposition commentary series.