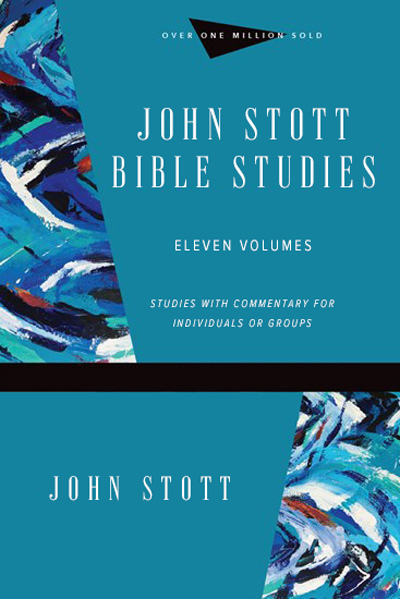 Hailed as the elder statesman of evangelical Christianity, John Stott was one of the most beloved and respected Bible teachers of his day. Throughout his five-decade ministry he was a tireless and faithful expositor, writer and speaker. His commentaries have informed and inspired pastors and preachers around the globe. As a result, millions have benefited from his careful study and insightful interpretation.

Using this Bible study series, you can explore Scripture side by side with John Stott—enhancing your own in-depth study with his insights gained from years of immersion in God's Word. Each of eleven study guides includes Stott's informative and eloquent exposition of key biblical passages with inductive study questions for individual reflection or group discussion.

The John Stott Bible Study Series will serve you as an excellent introduction both to the work of John Stott and, more importantly, the riches of Scripture.

Select a link below for more information about individual volumes in the series:

John R. W. Stott (1921–2011) has been known worldwide as a preacher, evangelist, and communicator of Scripture. For many years he served as rector of All Souls Church in London, where he carried out an effective urban pastoral ministry. A leader among evangelicals in Britain and the United States and around the world, Stott was a principal framer of the landmark Lausanne Covenant (1974).

Stott's many books have sold millions of copies around the world and in dozens of languages. His best-known work, Basic Christianity, has sold two million copies and has been translated into more than sixty languages.