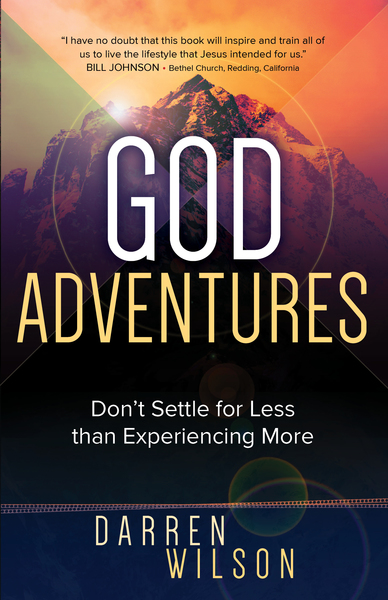 For many people, Christianity has become an institution of rules, duty, and potlucks. But for filmmaker Darren Wilson, his life of cultural Christianity changed radically when a powerful encounter with God led him to begin making films that attempted to display the God of the Bible in living color. What happened over the next ten years has affected millions around the world, and has set fires ablaze in hearts that have long sat dormant.

God Adventures is an honest and compelling book about the events surrounding the making of these powerful films (Finger of God, Furious Love, Father of Lights, Holy Ghost, and Holy Ghost Reborn), and is designed to take you into a deeper, more fulfilling and, yes, riskier relationship with God.

Like Darren’s films, this book focuses on: Christianity was never meant to be a social club—it was meant to change the world. God Adventures provides biblical insight for the supernatural occurrences documented in Darren’s films, along with behind-the-scenes stories that will inspire, engage, and challenge you to not settle for less than experiencing all of God.
ISBN: 9781424552702