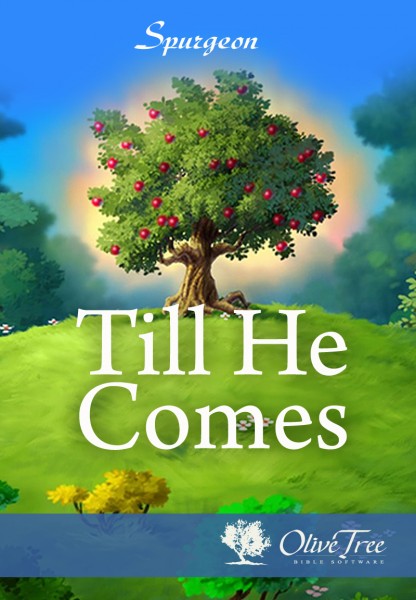 Title: Till He Come

For many years, whether at home or abroad, it was Charles Spurgeon's constant custom to observe the ordinance of the Lord's supper every Sabbath-day, unless illness prevented. This he believed to be in accordance with apostolic precedent; and it was his oft-repeated testimony that the more frequently he obeyed his Lord's command, "This do in remembrance of Me," the more precious did his Saviour become to him, while the memorial celebration itself proved increasingly helpful and instructive as the years rolled by.

Several of the discourses here published were delivered to thousands of communicants in the Metropolitan Tabernacle, while others were addressed to the little companies of Christians,—of different denominations, and of various nationalities,—who gathered around the communion table in Mr. Spurgeon's sitting-room at Mentone. The addresses cover a wide range of subjects; but all of them speak more or less fully of the great atoning sacrifice of which the broken bread and the filled cup are the simple yet significant symbols.

Charles Haddon Spurgeon, commonly C.H. Spurgeon, (June 19, 1834 – January 31, 1892) was a British Baptist preacher who remains highly influential amongst Reformed Christians of different denominations, among whom he is still known as the "Prince of Preachers."

Born in Kelvedon, Essex, Spurgeon's conversion to Christianity came in January 1850 at the age of fifteen. On his way to a scheduled appointment, a snow storm forced him to cut short his intended journey and to turn into a Primitive Methodist chapel in Colchester where, in his own words: "God opened his heart to the salvation message."