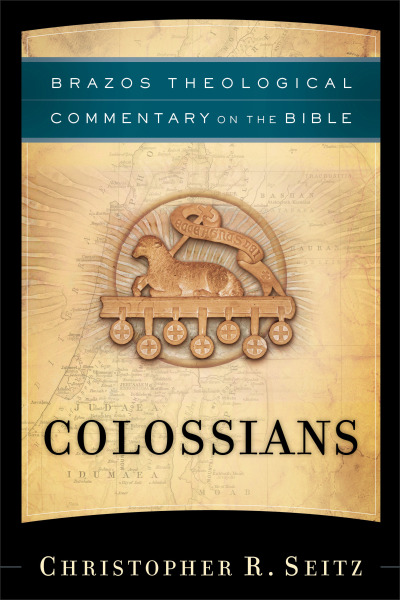 The Brazos Theological Commentary on the Bible advances the assumption that the Nicene creedal tradition, in all its diversity, provides the proper basis for the interpretation of the Bible as Christian scripture. The series encourages readers to extend the vital roots of the ancient Christian tradition to our day.

In this addition to the acclaimed series, renowned scholar Christopher Seitz offers a theological exegesis of Colossians, bringing his expertise in canonical reading to bear on his interpretation of this Pauline letter. As with other volumes in the series, the book is ideal for those called to ministry.

The Brazos Theological Commentary on the Bible enlists leading theologians to read and interpret Scripture for today, just as the church fathers, the Reformers, and other orthodox Christians did for their times and places. Each volume is designed to serve the church—providing a rich resource for preachers, teachers, students, and study groups—and demonstrate the continuing intellectual and practical viability of theological interpretation of Scripture.

This volume is available for purchase individually, or as part of the Brazos Theological Commentary on the Bible (27 Vols.) - BTC.

"[A] very fruitful examination of Colossians....I particularly appreciated Seitz's unequivocal statement of his own positions on controversial matters ('in my view...'). His discussion of 'hidden-ness' and self-knowledge in 3:3-4 is both moving and of practical spiritual and pastoral importance...Seitz provides careful explanation when his translations vary from major published versions. I enjoyed the closing fictional paraphrase: 'Paul in His Own Words,' with its reminder that we 'must allow the old word itself to do its new work, getting out of its way.'" - Bonnie Thurston, Catholic Biblical Quarterly

"[Seitz's] theological interests shine brightly...Seitz offers a wealth of canonical and theological commentary on the text of Colossians...By and large, readers will be enriched both theologically and historically...Seitz's commentary, while paying due attention to the history and importance of theological interpretation as represented in the Nicene tradition, seems to prioritize the scriptural text. Well done!" - Robert Gundry, Books & Culture

"Seitz's Colossians gives new expression to the canonical approach to biblical interpretation begun by Brevard Childs and carried on by Seitz. This is its first and primary contribution to the burgeoning literature on the theological interpretation of Scripture. Seitz's canonical approach, grounded in the biblical theology movement, will certainly satisfy readers appreciative of his earlier work. On the other hand, readers who assume a fundamental break between biblical theology and the theological interpretation of Scripture will likely find themselves wishing that Seitz had brought Colossians, an imprisoned apostle's reflection on his vocation, into conversation with relevant theologians ancient and modern...Even these readers, however, will certainly benefit from Seitz's singular ability to connect Colossians with the rest of the canon." - Devin L. White, Review of Biblical Literature

"This new volume in the Brazos Theological Commentary series is a welcome addition, and, within the parameters of the series, it admirably fulfills its aims...[It] very helpfully open[s] up new theological horizons that historio-critical commentaries can sometimes skim over. It is in that area that it makes its unique and valuable contribution to the continued study of Colossians." - Paul Foster, Expository Times

"Seitz's commentary on Colossians represents the kind of contribution that the Brazos Theological Commentary on the Bible envisions: a refreshing interpretation of the letter that is informed by multiple interpretive horizons and also makes several suggestive advances in Pauline studies. As Seitz memorably orients his readers, 'At some point the canonical portrayal sits there before us and requests that we take it seriously as a factor in interpretation.' This commentary will surely prove fruitful for those who are serious about pursuing this particular task." - Ched Spellman, Journal of the Evangelical Theological Society

Christopher R. Seitz (PhD, Yale University) is senior research professor of biblical interpretation at Wycliffe College, University of Toronto, in Toronto, Ontario, and is an ordained Episcopal priest. He previously taught at the University of St. Andrews and Yale University. He is the author or editor of numerous books, including The Character of Christian Scripture, Prophecy and Hermeneutics, The Goodly Fellowship of the Prophets, and Nicene Christianity.