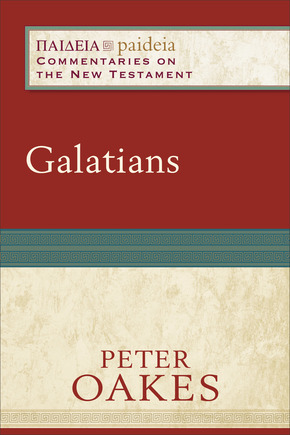 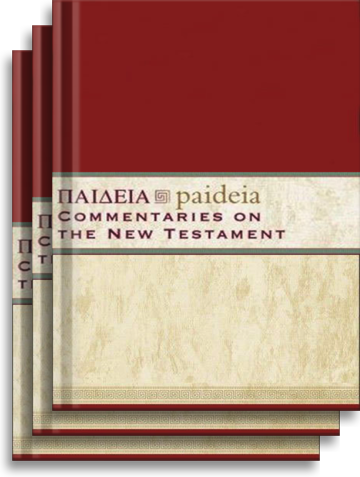 Paideia Commentaries on the New Testament
Buy the set and save 21%
$399.99

In this volume, respected New Testament scholar Peter Oakes offers a translation and reading of Galatians as presenting a gospel of unity in diversity in Christ. He shows that Paul treats the Galatians' possible abandonment of his gospel as putting at stake their fidelity to Christ. As with other volumes in the Paideia series, this volume is conversant with contemporary scholarship, draws on ancient backgrounds, and attends to the theological nature of the text. Students, pastors, and other readers will appreciate the historical, literary, and theological insight offered in this practical commentary.

"This is not a full critical commentary (I, for one, would be happy to read a full critical commentary on Galatians by Oakes), but for a midsize commentary aimed at theology students it punches above its weight...The first thirty-three pages are an accessible but impressively thorough critical introduction to the letter, and the balance of the book comprises evenly distributed, section-by-section commentary on the text of Galatians...No reader will agree with every one of Oakes's interpretive decisions, but he is consistently canny, open-minded, and charitable in his arguments, and he seems, on balance, rather less invested in a totalizing theological scheme than some other commentators on Galatians have been, which yields certain benefits in a commentary." — Matthew V. Novenson, Review of Biblical Literature

"Although the Paideia series is aimed at students such as upper-division undergraduates, this commentary on Galatians far exceeds this primary target group. Oakes's firsthand knowledge of the sociological and archeological context of early Christianity will inform professional scholars as well as students. So does his treatment of cultural and literary conventions of the first century CE...A fine balance is sought between a reader-centered literary approach and a variety of contextual elements. Interpreting Galatians, as most Pauline scholars know, is a hazardous undertaking. Oakes's excellent commentary renders sociological, archeological, and cultural data fruitful for the interpretation of Paul's letter." — Bart J. Koet and Jaap F. van der Meij, Review of Biblical Literature

"A fine commentary on Paul's fiery letter to the Galatians. One of the many strengths of this treatment is the way it draws upon Oakes' rich knowledge of the historical and social background to the letter...There is much to commend in this commentary. The introduction is rich and informative, the exegesis is sure-footed and clear, and the writing style is crisp and lucid. This is another outstanding contribution to the Paideia series, which is establishing a reputation for 'punching above its weight.' This excellent commentary will be consulted with rich reward alongside some of the lengthier treatments of the fascinating letter to the Galatians." — Paul Foster, Expository Times

"The Paideia commentaries are designed to help students engage with biblical texts, and Oakes scores very highly, notably in his introduction, but also in his lucid and judicious commentary...Oakes's expert knowledge of historical and literary background is very evident, and his material is attractively presented with useful tables and even some pictures." — David Wenham, Journal for the Study of the New Testament

"Rarely does a commentary make positive contributions to academic conversations while at the same time keeping an eye towards pastors and students. Oakes accomplishes both in 200 pages. Peter Oakes has written a concise, but very insightful, commentary on Galatians. ...His use of Greco-Roman primary texts and material remains throughout his commentary [is] noteworthy...Oakes has given us a fine work of exegesis that would be beneficial to pastors and students alike. This volume is highly recommended." — Esau McCaulley, Religious Studies Review

"Oakes employs expertise in Roman archaeology, sensitivity to the subtleties of ancient rhetoric, and active conversation with some of the most important research on Galatians to produce a significant contribution...Oakes's commentary provides a helpful resource to its readers...The commentary is a profitable addition to the exegete's toolbox." — Russell Morton, Bulletin for Biblical Research

Peter Oakes (DPhil, University of Oxford) is professor of New Testament at the University of Manchester, England. He is the author of Reading Romans in Pompeii: Paul's Letter at Ground Level and Philippians: From People to Letter, and has produced many publications on the interface between the New Testament and the Graeco-Roman world. He also serves as editor of Journal for the Study of the New Testament Booklist.