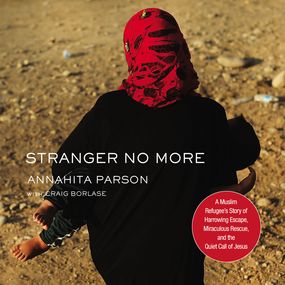 There will be pain ahead, and trouble and problems that I won’t be able to fix on my own.

But in them all, I know God will be there, calling me to look to him. Inviting me to take the next step toward his open arms.

And I will say yes.

Annahita Parsan was born into a Muslim family in Iran and grew up with the simple hope of one day finding a good husband, having children, and doing some good in the world. Married and a mother before she turned eighteen, Annahita found herself unexpectedly widowed and trapped for years in an abusive second marriage that she later fled—discovering instead a God who might love her.

Stranger No More is the remarkable true story of Annahita’s path from oppression to the life-changing hope of Jesus. Fleeing Iran across the mountains into Turkey, she spent months in the terrifying Agri prison before a miraculous release and flight to Europe, where she and her two children knelt in a church and prayed, “God, from this day on we are Christians.”

Filled with unthinkable circumstances, miraculous rescues, and the quietly constant voice of Jesus, Stranger No More leads readers deep into the heart of God and draws them toward the same call that Annahita heeds today: using her past to save others from theirs. As the leader of two congregations in Sweden, Annahita has baptized hundreds of former Muslims since her own conversion, has seen firsthand the powerful ways God is at work among those who have left Islam behind, and is reminded every day that saying yes to God is always worth the risk.