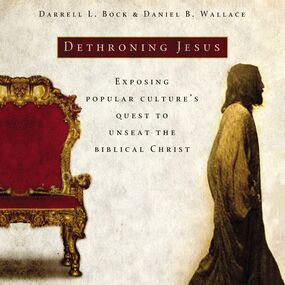 There is a quest going on to reduce Jesus to a mythic legend or to nothing more than a mere man. Scholars such as Elaine Pagels and James Tabor are using recent discoveries like the Gospel of Judas and the Gospel of Thomas to argue that the Christ of Christianity is a contrived figure and that a different Christ—one human and not divine—is the "true" Christ.

Both research professors, Bock and Wallace set out a vigorous defense of Christianity against a popular trend that they dub "Jesusanity", where Christ was simply a human teacher. In their trademark, easy-to-understand style, the authors take on attempts to redefine Jesus in a convincing way that will help you understand that the orthodox understanding of Christ and his divinity is as trustworthy and sure as it ever was. This book:

If you’re exhausted by the constant attempts to dethrone Jesus, renew the security of your knowledge of who Jesus really is: the Son of God.

Accompanying visuals and bibliography are included in the accompanying PDF.