Remarriage after Divorce in Today's Church 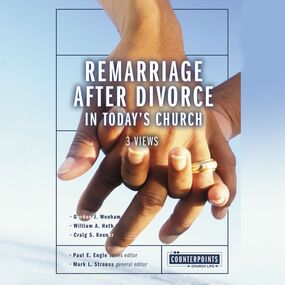 Remarriage after Divorce in Today's Church

Despite a strong belief in the institution and sacredness of marriage, studies show that Christian spouses experience divorce at least as much as the secular population.

But whatever the reasons for a divorce--beyond the divorce itself--many Christians want to know: does the Bible support remarriage?

The fact is that no consensus exists among evangelicals on their views of remarriage, leaving many Christians confused. This Counterpoints volume explores the biblical and practical cases for the three main evangelical views on remarriage after divorce:

Each of the three contributors offers his point of view succinctly and with biblical support, and each interacts with the others to help readers come to their own conclusions.

Further resources and reflection questions are included in the audiobook companion PDF download.

The Counterpoints series presents a comparison and critique of scholarly views on topics important to Christians that are both fair-minded and respectful of the biblical text. Each volume is a one-stop reference that allows readers to evaluate the different positions on a specific issue and form their own, educated opinion.