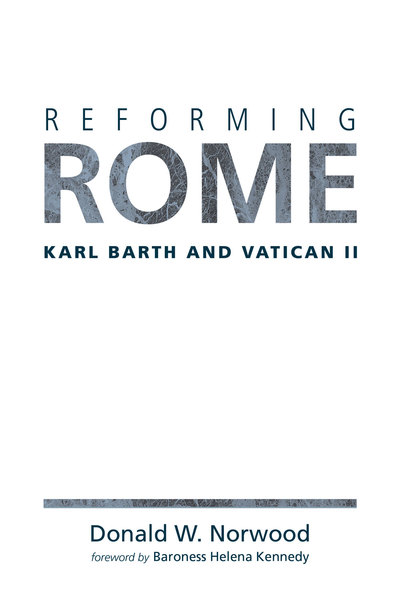 Few people realize that Karl Barth, one of the twentieth century’s greatest Protestant theologians, was among a select group of non-Catholic guests who were invited to the Second Vatican Council (1962–65) to assist in the reform and renewal of the Roman Catholic Church. In Reforming Rome Donald Norwood offers the first book-length study of Barth’s involvement with Vatican II and his significant impact on the reform of the Catholic Church.

Norwood examines Barth’s critical engagement with the Roman Catholic Church from his time at the (Catholic) University of Munster to his connection with Vatican II, his conversations with Pope Paul VI, and seminars and interviews he gave about the Council afterward. On the basis of extensive research, Norwood amplifies Barth’s own very brief account of Vatican II.

Barth himself often felt that he was better understood by Roman Catholics such as Hans Küng, Hans Urs von Balthasar, and Joseph Ratzinger than he was by his own Reformed colleagues. This study, written by a fellow Reformed theologian, helps us to see why.
ISBN: 9781467443180