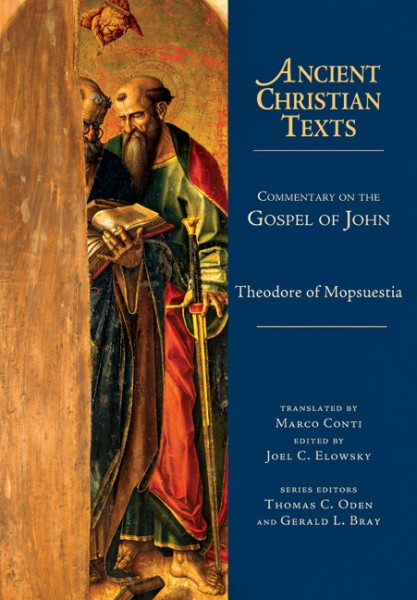 Title: Ancient Christian Texts - Commentary on the Gospel of John

Theodore of Mopsuestia, born in Antioch (c. 350) and a disciple of Diodore of Tarsus, serves as one of the most important exemplars of Antiochene exegesis of his generation. Committed to literal, linguistic, grammatical and historical interpretation, he eschewed allegorical explanations that could not be supported from the text, though he was not averse to typological interpretations of Old Testament texts that were supported by the New.

Regrettably, Theodore was dragged posthumously into the Nestorian controversy, and his works were condemned by the Three Chapters and the Council of Constantinople in 553. As a result many of his theological and exegetical works were lost or destroyed. The original Greek version of his Commentary on the Gospel of John remains only in fragments. This new English translation is based on an early complete Syriac translation dated A.D. 460-465, within forty years of Theodore’s death in 428.

While charges of heterodoxy against Theodore may not be entirely justified, there remains an apparent dualism in his Christology that should be critically viewed in light of the later Chalcedonian formula. With this caution, there still remains much that is valuable for contemporary readers, whether preachers, students or lay people interested in the early church’s understanding of the Gospel of John.

Here for the first time is a complete English translation of this valuable work, ably translated by Marco Conti and edited by Joel C. Elowsky.

Ancient Christian Texts is a series of new translations, most of which are here presented in English for the first time. The series provides contemporary readers with the resources they need to study for themselves the key writings of the early church. The texts represented in the series are full-length commentaries or sermon series based on biblical books or extended scriptural passages.