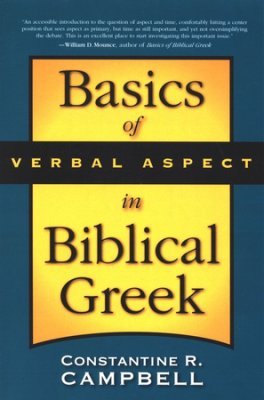 Verbal aspect in the Greek language has been a topic of significant debate in recent scholarship. The majority of scholars now believe that an understanding of verbal aspect is even more important than verb tense (past, present, etc.). Until now, however, there have been no accessible textbooks, both in terms of level and price (most titles on the topic retail for more than $100).

In this book, Constantine Campbell investigates the function of verbal aspect within the New Testament Greek narrative. He has done a marvelous job in this book of simplifying the concept without getting caught up using terms of linguistics that no one except those schooled in that field can understand. The book includes exercises, an answer key, glossary of key concepts, an appendix covering space and time, and an index to Scripture cited. Professors and students, at both the undergraduate and graduate levels, will use this is as a supplemental text in both beginning and advanced Greek courses. Pastors that study the Greek text will also appreciate this resource as a supplement to their preaching and teaching.