7: An Experimental Mutiny Against Excess 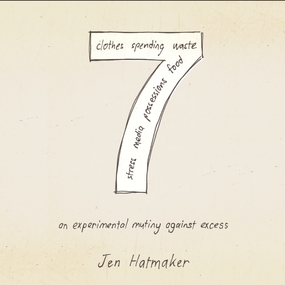 7: An Experimental Mutiny Against Excess

Title: 7: An Experimental Mutiny Against Excess

Do you feel trapped in the machine of excess? Jen Hatmaker was. Her friends were. And some might say that our culture is. Jen once considered herself unmotivated by the lure of prosperity, but upon being called “rich” by an undeniably poor child, evidence to the contrary mounted, and a social experiment turned spiritual journey was born. 7 is the true story of how Jen took seven months, identified seven areas of excess, and made seven simple choices to fight back against the modern-day diseases of greed, materialism, and overindulgence. Food. Clothes. Spending. Media. Possessions. Waste. Stress. Jen and her family would spend 30 days on each topic, boiling it down to the number seven. Only eat seven foods, wear seven articles of clothing, and spend money in seven places. Eliminate use of seven media types, give away seven things each day for one month, adopt seven green habits, and observe “seven sacred pauses.” So, what’s the payoff from living a deeply reduced life? It’s the discovery of a greatly increased God — a call toward Christ-like simplicity and generosity that transcends a social experiment to become a radically better existence. 7 is funny, raw, and not a guilt trip in the making, so come along and consider what Jesus’ version of rich, blessed, and generous might look like in your life.
ISBN: 9781621881636