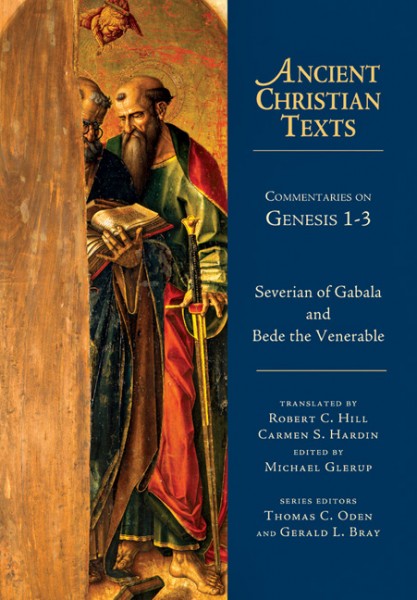 The church fathers displayed considerable interest in the early chapters of Genesis, and often wrote detailed commentaries or preached series of homilies on the Hexameron—the Six Days of Creation—among them Eustathius of Antioch, Basil the Great, Gregory of Nyssa, Theodore of Mopsuestia, Ambrose, John Chrysostom and Augustine.

This volume of Ancient Christian Texts offers a first-time English translation of Severian of Gabala's In cosmogoniam and a fresh translation of a portion of Bede the Venerable's Libri quatuor in principium Genesis. Severian, bishop of Gabala in Syria, who early on was a friend of John Chrysostom, later turned against him and opposed him at the Synod of Oak in 403. Though displaying his own strengths, weaknesses and idiosyncrasies, Severian still represents the so-called Antiochene school with its preference for literal over allegorical interpretation of texts. The text derives from the six homilies found in Migne’s Patrologia graeca, volume 56, together with a seventh homily found only in the 1613 Eton edition of John Chrysostom’s works, edited by Henry Savile, and falsely attributed to Chrysostom. These homilies have been ably translated with explanatory notes by Robert C. Hill.

The commentary from Bede the Venerable derives from Book I of his four-book commentary on Genesis from the account of creation to the casting out of Ishmael. Bede was a polymath—teacher, computist, exegete, historian—and one of the foremost scholars from Anglo-Saxon England. As a teacher, Bede strove to hand on the tradition of the church in a form easily understood by those who might not be well educated. These early chapters in Genesis provided teaching on creation, human origins, sin and redemption. The text deriving from Corpus Christianorum Latina is ably translated with explanatory notes by Carmen Hardin.