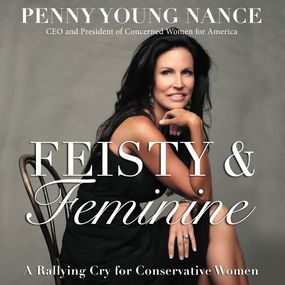 Tired of inauthentic prattle, CEO and president of Concerned Women for America Penny Young Nance is ready to change the way women today engage the culture. In her debut title, Feisty & Feminine, she takes an honest and transparent look at what it means to be a conservative Christian woman with thoughtful commentary on the real issues confronting American women.

“Conservative women have never fit neatly into stereotypes, especially conservative Christian women,” says Penny Young Nance. “We’re not the humorless, dim-witted ‘church ladies’ Saturday Night Live has made us out to be. Today’s conservative women are intelligent, well-educated, compassionate, accomplished, funny, and fearless—and it’s time for us to stand up and be heard. In fact, we have an opportunity like never before to offer words of redemption to a world gone mad.”

From Miley Cyrus to campus feminists, it’s clear that women are still searching for their voice in culture today. With Hillary Clinton running for president in 2016, there is even more of a need for a compelling, conservative, and credible female influence in the mix. Penny Nance is that woman. She is direct without being disrespectful, winsome but not shallow, and relevant while still holding to faith and conservative values.

Accepting the baton of leadership from their foremothers, today’s conservatives have emerged as intelligent, hard-working women of faith who not only deal with issues like life and marriage, but are also advocates for the free market, for rights of conscience, and for female victims of radical Islam. Passionate about their role in society, they refuse to turn a blind eye to the sexual exploitation of women or the hypocrisy surrounding women’s issues.

The time is right for this book—and for conservative women everywhere to be part of the conversation.