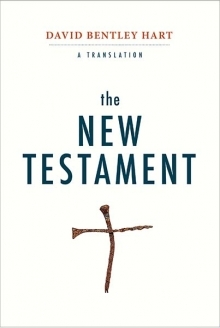 From one of our most celebrated writers on religion comes this fresh, bold, and unsettling new translation of the New Testament.

David Bentley Hart undertook this new translation of the New Testament in the spirit of “etsi doctrina non daretur,” “as if doctrine is not given.” Reproducing the texts’ often fragmentary formulations without augmentation or correction, he has produced a pitilessly literal translation, one that captures the texts’ impenetrability and unfinished quality while awakening readers to an uncanniness that often lies hidden beneath doctrinal layers.

The early Christians’ sometimes raw, astonished, and halting prose challenges the idea that the New Testament affirms the kind of people we are. Hart reminds us that they were a company of extremists, radical in their rejection of the values and priorities of society not only at its most degenerate, but often at its most reasonable and decent. “To live as the New Testament language requires,” he writes, “Christians would have to become strangers and sojourners on the earth, to have here no enduring city, to belong to a Kingdom truly not of this world. And we surely cannot do that, can we?”

David Bentley Hart is an Eastern Orthodox scholar of religion, and a philosopher, writer, and cultural commentator. He is a fellow at the Notre Dame Institute for Advanced Study and has held positions at the University of Virginia, Duke University, and Providence College. He lives in South Bend, IN.