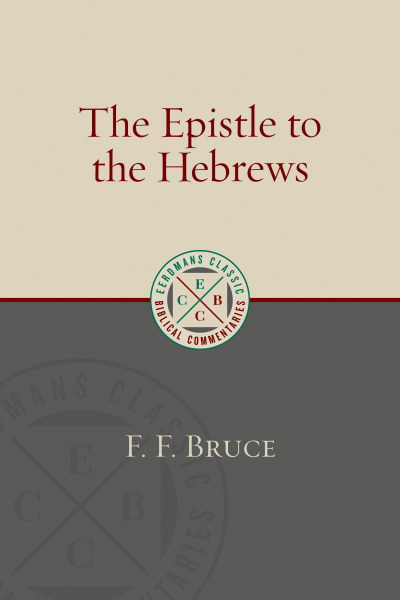 For many readers the Epistle to the Hebrews is among the most difficult books of the New Testament. Understanding this rich, complex letter calls for a deep knowledge of its Old Testament underpinnings and of first-century biblical exegesis. This volume on Hebrews—originally part of the New International Commentary on the New Testament (NICNT) series—demon­strates F. F. Bruce’s mastery of both subjects.

First published in 1964 to instant critical acclaim, Bruce’s commentary has since become a classic work of evangelical biblical scholarship. Just before his death Bruce completed a full revision of the text, incorporating twenty-five years of further study. Every reader of Hebrews—whether student or scholar, minister or layperson—will benefit from the careful exegesis and pastoral wisdom distilled in this volume.

The Eerdmans Classic Biblical Commentaries series collects the best and most trusted Eerdmans commentaries from years gone by in a format that will make them available to readers for years to come. Some of the ECBC volumes were originally published in major commentary series, others as freestanding books. Some were first published decades ago, others more recently. Though written over the years for various levels of readers, the Eerdmans Classic Biblical Commentaries all have this in common: pastors, scholars, and serious students of the Bible continue to read them, study them, and rely on them to help unlock the meaning and message of the Scriptures.

This volume is available individually, or as part of the Eerdmans Classic Biblical Commentaries Set.

"Every preacher and New Testament scholar should have a commentary by F. F. Bruce on Hebrews in his or her library." — Calvin Theological Journal

"The original edition was still arguably the best English commentary on Hebrews for general use. . . .The update of this standard commentary is unreservedly welcomed." — The Bible Translator

F. F. Bruce (1910-1990) was Rylands Professor of Biblical Criticism and Exegesis at the University of Manchester, England. Author of numerous commentaries and other books, he served as general editor of the NICNT series from 1962 to 1990.