First Principles of the Reformation (95 Theses) 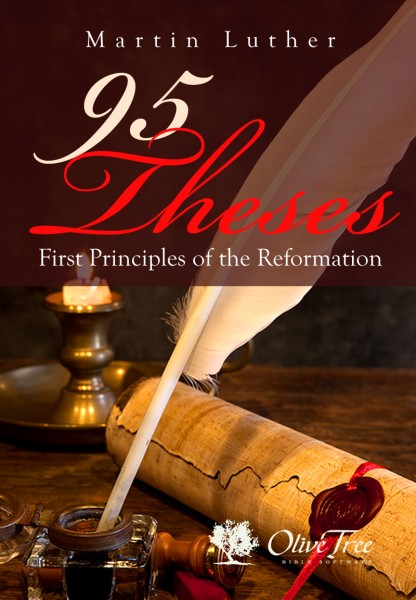 First Principles of the Reformation (95 Theses)

The Protestant Reformation is one of the most important events in the history of Western Christianity. At the heart of the Reformation lie the teaching and writing of Martin Luther. In First Principles of the Reformation, Martin Luther's most influential writings are collected, along with theological and historical introductions by British scholars of religion. This collection, published originally in 1883, was the first popular translation of Luther's writings into English.

The 95 Theses. This historic document, allegedly nailed to the door of the Wittenberg Church in 1517, was Luther's 95-point argument against the Roman Catholic system of indulgences, where believers could literally purchase forgiveness of their sins from priests with money.

Three treatises entitled To the Christian Nobility of the German Nation, Treatise on Christian Liberty, and Of the Babylonish Captivity of the Church. Together, these three works are known as the Three Great Reformation Treatises and contain the fullness of Luther's theological and practical criticisms of the Roman Catholic church of his day. After their publication in 1520, Luther was excommunicated.

Two introductory essays entitled On the Primary Principles of Luther's Life and Teaching, by Henry Wace, and The Political Course of the Reformation (1517-1546), by C. A. Buchheim, both of King's College, London.

This historic collection is an important addition to the library of any student of church history, and an excellent way to learn about the Reformation using primary source documents.


Martin Luther (1483 – 1546) was a German monk, priest, professor, theologian, and church reformer. He criticized many aspects of the Roman Catholic church of his day, including the complex system of sacraments. Luther preached the doctrine of justification by faith, teaching that salvation is a gift of God's grace through Christ received by faith alone. His teachings inspired the Protestant Reformation.

Luther translated the Bible into common language, making it accessible to laypeople for the first time, wrote hymns which encouraged the development of congregational singing, and married Katharina von Bora, establishing the model of clerical marriage within Protestantism.