Focus on the Bible: Isaiah - FB 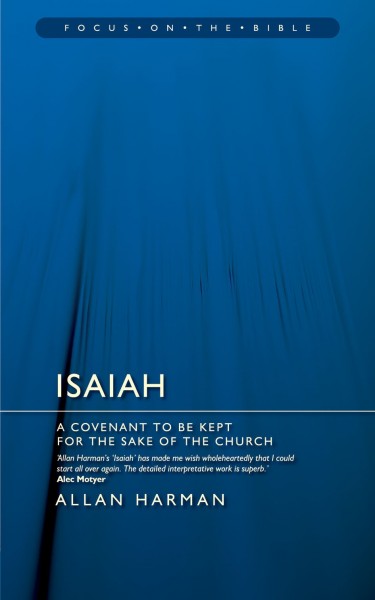 Focus on the Bible: Isaiah - FB

Isaiah has been called the 'fifth gospel'. Why? Because in it God speaks through his prophet of his people's departure from truth, the need for repentance and the redemption provided by a coming saviour. Isaiah's imagery is some of the most beautiful, and terrifying, in the Bible.

It was written in the 8th century BC at a time of material prosperity. This wealth had brought increased literacy and so God's people could be brought back by a book of 66 chapters to understand a world that had spiritual, as well as physical, dimensions.

This is a key Old Testament book, as well as charting a key change in the life of God's people it provides some of the most important prophecies fulfilled only in the life of Jesus of Nazareth. Its lessons for the contemporary church are particularly apt.

Too often modern commentaries become a discussion between commentators rather than an exploration of what the text has to say to contemporary readers. Allan Harman's methods follow those of Leon Morris and Allan McRae in that he devotes most of his energy to discovering what God is saying through his prophet, rather than what we are saying amongst ourselves.

This volume is available for purchase individually, or as part of the Focus on the Bible Commentary Set (41 Vols.).

"This is quite a remarkable commentary in the Focus on the Bible series. Within the space of 416 pages we have a very clear introduction to and exposition of the large Book of Isaiah. The exposition reads simply and has a freshness about it that is very pleasing. Highly recommended." - RSW, The Presbyterian Banner

"Outstanding. What I mean by that is that he has been able to do the work of a first class exegete, yet make it understandable to a wide audience. As I train my theological students in the prophets of the Bible I will send them to this book immediately." - John Currid, Chancellor’s Professor of Old Testament, Reformed Theological Seminary, Jackson, Mississippi

"With Allan Harman's 'Isaiah' before me, I know what the saying means that 'even a cat can look at the queen'! His work has made me wish wholeheartedly that I could start all over again. The detailed interpretative work is superb, and Harman's defence of the unity of Isaiah is robust (to say the least), and, in my view, unanswerable. I thrill to a commentator whose prime aim is to understand and explain the Hebrew Text, not just to distil the opinions of others. Thank God for this book - and its author." - Alec Motyer, (1924–2016) Well known Bible expositor and commentary writer

Allan Harman has had a life-time interest in exposition of the biblical text, and also in the history of interpretation. He is Research Professor of Old Testament at the Presbyterian Theological College in Melbourne, Australia. He has lectured and preached in many countries, and he served as the senior editor of the Reformed Theological Review, Australia's oldest theological journal until he retired at the end of 2013.