Jesus Through Middle Eastern Eyes: Cultural Studies in the Gospels 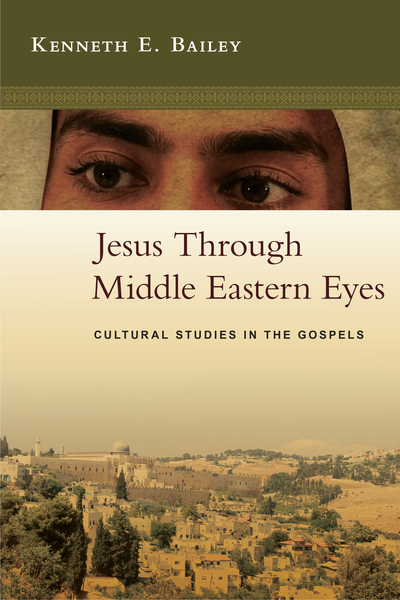 Jesus Through Middle Eastern Eyes: Cultural Studies in the Gospels

Beginning with Jesus' birth, Ken Bailey leads you on a kaleidoscopic study of Jesus throughout the four Gospels. Bailey examines the life and ministry of Jesus with attention to the Lord's Prayer, the Beatitudes, Jesus' relationships with women, and especially Jesus' parables.

Through it all, Bailey employs his trademark expertise as a master of Middle Eastern culture to lead you into a deeper understanding of the person and significance of Jesus within his own cultural context. With a sure but gentle hand, Bailey lifts away the obscuring layers of modern Western interpretation to reveal Jesus in the light of his actual historical and cultural setting.

"Learning to read Scripture through other people's cultural spectacles, as well as our own, always brings huge enrichment. Kenneth Bailey has done a fantastic job in enabling us to put on the spectacles of a Middle Eastern believer and to therefore gain new insights into what was always there in Scripture but not quite so clear when only viewed through our lenses." - Mary J. Evans, vice-principal emeritus, London School of Theology

"Kenneth Bailey, a master storyteller and expert observer of Middle Eastern culture, applies his sixty years of experience living in this region to produce a groundbreaking work on Jesus' world. Bailey animates the Jewish cultural world of first-century Roman Palestine through clever, often humorous personal vignettes and observations of current Middle Eastern culture. The blurry outlines of enigmatic biblical characters such as King Herod or Zacchaeus take clearer shape, and unnamed women such as the Syro-Phoenician mother or the adulterous woman are painted with colorful, culturally sensitive strokes. Bailey offers a feast for the mind and heart in his brilliant discussion of the Lord's Prayer and Jesus' parables; each chapter has plenty to savor. Throughout, Bailey connects theological and christological significance to his cultural insights, producing an original, engaging study. Bailey's passion for the biblical story coupled with his conversational prose render Jesus Through Middle Eastern Eyes a captivating read for scholars, pastors and laypeople alike." - Lynn Cohick, associate professor of New Testament, Wheaton College

"I have long been an admirer of Kenneth Bailey's helpful insights. As in his earlier works, his breadth of knowledge of Middle Eastern culture sheds rich light on numerous points in the Gospels, providing fresh perspectives and often illumining details we have rarely considered. He provokes those of us who depend mostly on ancient written sources to consider new approaches, often cohering with but often supplementing such research." - Craig Keener, professor of New Testament, Palmer Theological Seminary, and author of The IVP Bible Background Commentary: New Testament

"Among the many New Testament scholars interpreting the Gospels today, few offer new and dramatic insights like Kenneth E. Bailey. From a childhood in Egypt to a career working within the Middle East, Bailey has established himself as the premier cultural interpreter of the life of Jesus. Using insights from cultural anthropology and skilled exegesis, suddenly the Gospels come alive as the Middle Eastern stories that they are. Long after other scholars' books are forgotten, Bailey's work on the Gospels will continue to be a timeless resource into the world of Jesus. This newest volume, written for the nonspecialist, is a splendid place to begin. Jesus Through Middle Eastern Eyes is guaranteed to become a favorite on many Christians' bookshelves." - Gary M. Burge, professor of New Testament, Wheaton College Graduate School

"While no book on Jesus and the Gospels can be perfect or final, writing any really good book on them places staggering demands on an interpreter. To name just seven: literary aptitude, linguistic competence, critical shrewdness, cultural sagacity, theological acumen, spiritual sensitivity and hermeneutical sophistication. In this highly stimulating study Kenneth Bailey manages to reflect them all, and more besides, in part because he stands on the shoulders of Middle Eastern interpreters whom few in the West can even read. This book will sharpen historical understanding, improve much preaching and fuel new scholarship. It may shed as much new Licht vom Osten ('light from the ancient East') on Gospel passages as we have seen since Deissmann's book by that title a century ago. And in all of this, Bailey keeps the cross and the message of his sources at the center where they belong." - Robert W. Yarbrough, associate professor and New Testament department chair, Trinity Evangelical Divinity School