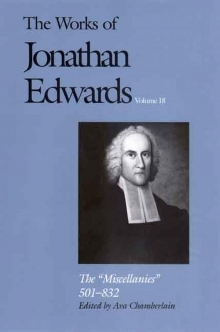 Throughout his ministerial career, Jonathan Edwards filled a series of private notebooks with writings on a wide variety of theological topics, numbering his entries—some 1,400 of them—in sequence. This book, the second of four volumes devoted to these “Miscellanies,” contains entries written during the decade of the 1730s, from July 1731 to approximately January 1740, the eve of the Great Awakening. They record the development of Edwards’ thought as he first emerged as a public spokesperson for orthodox Calvinism, assumed a leadership role in colonial New England church politics, and acquired an international reputation as an evangelist for his role in the revivals in the Connecticut River Valley of 1734 and 1735.

Edwards used the “Miscellanies” as a repository for ideas that he intended to develop in future sermons and treatises, and these entries contain the seeds of such contemporaneous works as Justification by Faith Alone and The History of the Work of Redemption. These entries also record how the Connecticut Valley revivals influenced Edwards’ thoughts on such important theological topics as the significance of perseverance, the nature of spiritual knowledge, justification by faith alone, the rationality of the Christian religion, the history of the work of redemption, and conversion and the religious life.

This volume can be purchased individually, or as part of the following set:
Works of Jonathan Edwards (26 Vols.) Ava Chamberlain is assistant professor in the Department of Religion at Wright State University.