New International Commentary on the New Testament (NICNT): The Letter to Philemon 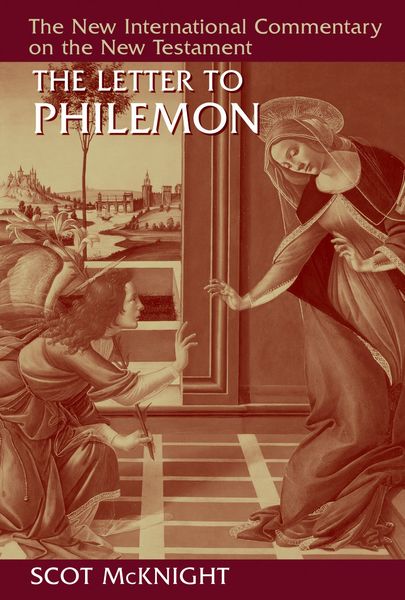 New International Commentary on the New Testament (NICNT): The Letter to Philemon

Title: New International Commentary on the New Testament (NICNT): The Letter to Philemon

Paul urges Philemon to challenge social barriers and establish new realities of conduct and fellowship. His letter is nevertheless a disturbing text that has been used to justify slavery. Though brief, the letter to Philemon requires and rewards close scrutiny.

In this commentary Scot McKnight carefully analyzes the text of Philemon and brings its entanglement with ancient Roman slavery into conversation with modern slavery. Too often, McKnight says, studies of this short letter gloss over the issue of slavery. Christians who want to read Philemon faithfully must grapple with moral questions, personal and institutional, that Paul himself does not raise. Pastors and scholars will find in McKnight’s commentary the insight they need to teach this controversial short book in meaningful new ways.

“Scot McKnight has given us a bold study of this controversial little letter. He stares unflinchingly into the realities of slavery. . . . Working from conservative positions on critical issues, McKnight sees the letter to Philemon as demanding that the church today work in society to bring reconciliation and liberation to a world in need of both.” — Jerry L. Sumney, Lexington Theological Seminary

“With thoughtful attention to the painful realities of Roman slavery, McKnight invites churches to approach this ‘deeply disturbing letter’ as an invitation to become spaces of reconciliation, communities that subvert slavery ‘by naming it, by fighting against it, and by embodying a new way of life.’ ” — Jennifer Glancy, author of Slavery in Early Christianity

“A lucid and illuminating verse-by-verse analysis of Paul’s letter to Philemon. Scot McKnight soberly tackles the topics of Roman slavery, reconciliation, and Paul’s vision for churches to be dominated not by power relationships but by sibling-like relationships rooted in the new creation. McKnight makes this small letter stand tall among the writings of the Pauline corpus. A sheer joy to read!” — Michael F. Bird, Ridley College, Melbourne

"This commentary is a helpful addition to scholarship on the shortest of Paul's letters. However, it is more than that. It allows readers to appreciate how this brief text might speak afresh to situations of oppression, powerlessness and modern slavery. Those probing insights make this a highly significant book." — Expository Times