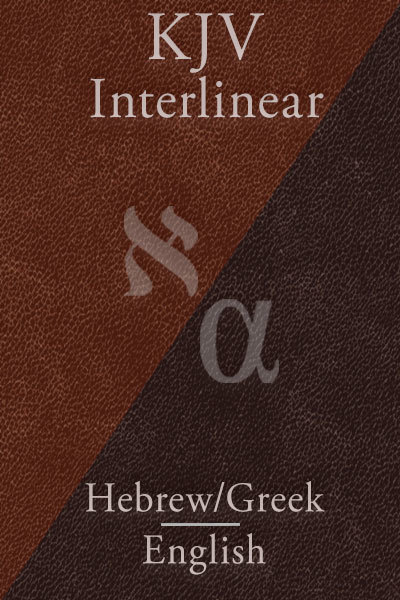 Learning the original languages of the Bible can be a difficult task. It takes years of study and countless hours of practice before you reach the point of reading without the help of additional resources. Unless your aim is to be a New or Old Testament scholar, most will not achieve that level of comfort with the original language texts. That doesn’t mean you can’t benefit from using the Greek and Hebrew Testaments in your studies. Whether you’re someone who can read these languages proficiently or have only ever used a Strong’s Bible, Olive Tree’s KJV Greek-English & Hebrew-English Interlinear is here to meet your needs.

The KJV Greek-English & Hebrew-English Interlinear makes it easy to perform in-depth original language word study by putting everything you need at your fingertips.

In the New Testament, quickly view the Greek text and tap on any word to view its parsing and definition. This allows users to quickly look up fuller meanings of words in the Olive Tree Enhanced Strong’s Dictionary, which is bundled with this resource. From the same pop-up quickly search and find everywhere the word appears in the New Testament. Below the Greek text you’ll find a basic English translation and the related Strong’s number. The last line of text in the Greek-English interlinear is the text of the KJV Bible, which is also linked to the Strong’s data.

The Old Testament interlinear provides similar in-depth study tools at your fingertips. The Hebrew text on the top line is matched with the appropriate lemma in the 2nd line, followed on lines 3 and 4 with a basic English translation and the related Strong’s number. As with the New Testament, the KJV Bible verse is then shown in its entirety with embedded Strong's links.

It is said that when William Tyndale (1494 to 1536) was burned at the stake for translating the New Testament into the English vernacular in 1526, his last words were, "Lord, open the eyes of the king!" Shortly thereafter, the Bible was made available in English by royal decree; in 1604, 85 years after Tyndale's work, King James I authorized a new translation of the whole Bible for use by the Church of England. The result was the King James Version, or KJV, of 1611: a work of profound gravity, careful scholarship, and surpassing literary quality that has influenced English language and literature for hundreds of years, has been preached from thousands of pulpits, has been quoted by countless writers, and has led millions to a saving knowledge of the Lord Jesus Christ. Though modern scholarship has led to revisions that strive for greater accuracy and readability (based both on a broader array of Greek texts and on gradual changes in English usage), the King James Version is still the source from which most literal English translations derive their inspiration.

The Byzantine Greek New Testament presents the Greek New Testament following the Byzantine textual tradition and based on the work of Maurice Robinson. The Byzantine text-type is the most widely attested textual recension among ancient manuscripts. However, it is not as widely relied on by modern critical editions such as the UBS4 or NA28 since many of the oldest manuscripts follow the Alexandrian textual tradition instead. Nevertheless, the Byzantine text is still of great interest to both students and scholars, as it presents a widely-used traditional text of the Greek New Testament. It is the basis of the Textus Receptus, which, in turn, is the basis of the King James Version, the Luther Bible, the Dutch Statenvertaling, and virtually all other translations up until the 20th century.

Upgrade Pricing Available! If you've previously purchased a qualifying product you can purchase this item for a special upgrade price. The upgrade price will be visible when you log in to your Olive Tree account and add the item to your cart (NOTE: Upgrade pricing is only available on www.olivetree.com, and not via in-app purchase).