Forged in Faith: How Faith Shaped the Birth of the Nation 1607-1776 - Olive Tree Bible Software 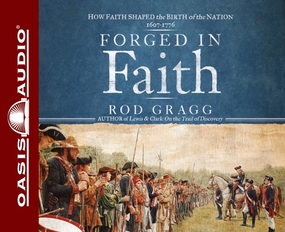 It motivated America’s founding fathers, influenced national independence, and inspired our foundational documents. Wars raged over it. Men died for it. All for faith. And out of the smoke and grit, a nation was born. From the founding of Jamestown in 1607 to the passage of the Declaration of Independence in 1776, Forged in Faith traces the epic colonization of America, the instrumental impact of the Great Awakening revival, and reveals the foundational faith that inspired American independence. With a compelling mix of dramatized story and action-driven narrative, award-winning historian Rod Gragg chronicles the pivotal and often-overlooked influence of Biblical faith on the making of America. Insightful and historically accurate, Forged in Faith recounts how faith motivated Pilgrims, Puritans, Presbyterians, Baptists, Quakers, Catholics, and Anglicans alike in a unique and fascinating history of early America and the faith that forged a nation.
ISBN: 9781608146789