An Appeal to All That Doubt - Olive Tree Bible Software

An Appeal to All That Doubt 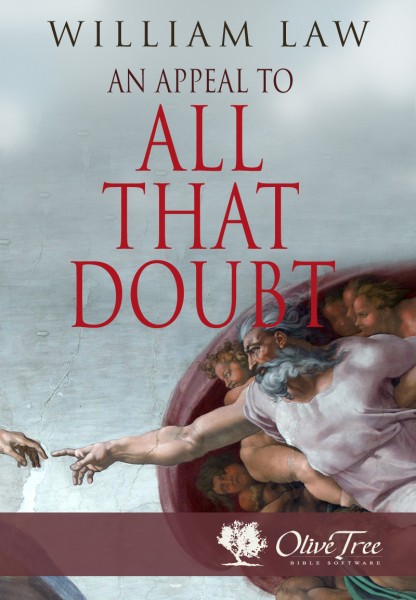 An Appeal to All That Doubt

Title: An Appeal to All That Doubt

William Law was a prolific writer throughout his life, publishing many important works of Christian theology. An Appeal to All That Doubt, published in 1740, has an expansive focus, laying out Law's entire cosmology—beginning with God's creation of the world and the origins of the human soul, extending through the fall and the origin of evil in the world, and culminating in the atonement of Jesus Christ and how all believers participate in the remission of sins.

Readers will find many familiar tenets of Christian doctrine explained here in Law's confident and ringing language. He also takes time to examine religious controversies of his day, and to argue against such ideas as Arianism and Deism. Of particular interest, however, are the finer points of Law's theology, such as the nature of angels and their role in creation and the fall, as well as the mystical idea of "spiritual fire" and its role in human salvation. For example:

For if every desire is in itself, in its own essence, the kindling of fire, then we are taught this great practical lesson, that our own desire is the kindler of our own fire, the former and raiser of that life which leads us. What our desire kindles, that becomes the fire of our life, and fits us either for the majestic glories of the kingdom of God, or the dark horrors of hell: so that our desire is all, it does all, and governs all, and all that we have and are, must arise from it, and therefore it is, that the scripture saith, "Keep thy heart with all diligence, for out of it are the issues of life."       —from Chapter II