Making of a Man: How Men and Boys Honor God and Live with Integrity - Olive Tree Bible Software

Making of a Man: How Men and Boys Honor God and Live with Integrity 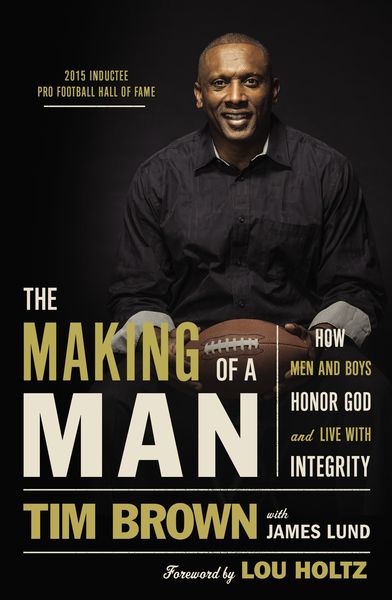 Making of a Man: How Men and Boys Honor God and Live with Integrity

Title: Making of a Man: How Men and Boys Honor God and Live with Integrity

What exactly is manhood? How do guys get there?

Tim Brown won the Heisman Trophy at Notre Dame and starred in the NFL for seventeen seasons. He left the game as a Los Angeles and Oakland Raiders legend and one of the most respected men in sports. Now “Mr. Raider” shares his amazing journey—the triumphs, the heartbreaks, the struggles with women, Al Davis, and God—as well as the principles and priorities that made him the man he is today.

Much more than a sports memoir, The Making of a Man reveals how faith, family, honor, and integrity have everything to do with true manhood and a life well-lived. Whether you are a rabid fan or have little interest in football, a young boy or already facing the fourth quarter of your life, these pages will both challenge and inspire you to become the man you’ve always known you could be.

When a man comes into your life and shows you something about yourself that you didn’t know was in you, it’s remarkable. The Apostle Paul did that for Timothy, encouraging him to preach and teach and reminding him, “Do not neglect your gift” (1 Tim. 4:14). Paul was a mentor to Timothy, ready to point out the gifts of his protégé and willing to help develop those gifts and pass on his knowledge. Lou Holtz did the same for me, as well as for a whole lot of other guys. That’s what a mentor does. I’ll always be grateful that he inspired me to believe in myself.

“I’ve had the privilege of knowing Tim for over thirty years now. I’ve seen him beat the odds in many different areas of life, especially as a father and a mentor. I believe this book will help bring out your true greatness as you read stories about Tim’s successes and struggles, and as you’re inspired by his commitment to integrity as well as the life principles and the faith that have carried him through.”

“Over the years, I’ve respected Tim Brown as an NFL opponent, a teammate, and a friend. In The Making of a Man, you will read what has made Tim the man he is today and learn vital lessons on what being a man is all about. Whether young or old, every guy should read this book.”