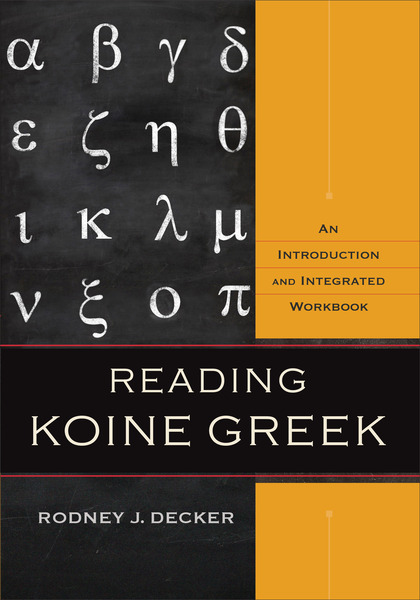 This in-depth yet student-friendly introduction to Koine Greek provides a full grounding in Greek grammar, while starting to build skill in the use of exegetical tools. The approach, informed by twenty-five years of classroom teaching, emphasizes reading Greek for comprehension as opposed to merely translating it.

The workbook is integrated into the textbook, with exercises appearing within each chapter rather than pushed to the end or located in a separate book. This enables students to practice concepts as they encounter them in the chapter--ideal for distance learning or studying beyond the traditional classroom.

The book covers not only New Testament Greek but also the wider range of Bible-related Greek (LXX and other Koine texts). It introduces students to reference tools for biblical Greek, includes tips on learning, and is supplemented by robust web-based resources through Baker Academic's Textbook eSources. Resources for students include flash cards and audio files. Resources for professors include a test bank and an instructor's manual.

"Reading Koine Greek is readable and user friendly yet remarkably sophisticated linguistically. Students learn not just forms and paradigms but, far more important, how language works and how the text as a whole functions as a communicative event. Students will also benefit from the hands-on workbook approach, which teaches by using Greek examples from the New Testament, the Septuagint, and other Koine texts. This is a pedagogically effective, accurate, and comprehensive text." — Mark L. Strauss, professor of New Testament, Bethel Seminary San Diego

"Rodney Decker has written a wonderful Koine Greek grammar for the twenty-first century. Unlike most grammars currently in print, Decker's work is up to date with the cutting-edge issues in Greek linguistics, including verbal aspect, voice, lexical semantics, and pronunciation. The grammar draws on text beyond the Greek New Testament--including the Septuagint, Pseudepigrapha, and the Apostolic Fathers--and provides extension for advanced students on topics such as accentuation and grammatical diagramming. Decker demonstrates clear pedagogical concern, making the material accessible and teachable. This is a modern grammar by a scholar-teacher with a true concern for his students." — Constantine R. Campbell, associate professor of New Testament, Trinity Evangelical Divinity School

"Rodney Decker's Reading Koine Greek reflects the most recent discussion of the Greek language, presented in a clear and practical way. Naturally, it will be especially attractive to Greek instructors in colleges and seminaries who share his understanding of Greek verbal aspect. Even those who understand the topic differently may be tempted to use this work, given the attractive features of this introductory grammar." — Roy E. Ciampa, Nida Institute for Biblical Scholarship and Gordon-Conwell Theological Seminary

"It is a joy to see a new textbook in Biblical Greek in keeping with the best of traditional pedagogy that is also attuned to more recent insights into how students learn and how the language works. I am particularly pleased to see Greek voice forms and usage presented in terms of the newly emerging consensus in this area." — Carl W. Conrad, department of classics, Washington University in St. Louis (retired)

"Decker's decades of experience teaching Greek shine through this beautifully laid-out textbook. The points of Greek grammar are introduced in a logical sequence, with lucid explanations that are easy for students to understand. It is also the most up-to-date textbook on the market, with detailed coverage of the latest developments in verbal aspect, deponency, lexicography, and pronunciation. It is strongly recommended for teachers who want their students to get a thorough grounding in both Greek and exegesis, as well as for those wanting to recharge their Greek." — Stephen C. Carlson, post-doctoral fellow in pre-Constantinian Christianity, faculty of theology, Uppsala University

"Rodney Decker's consummate skill as both a Greek scholar and a teacher is clearly evident in Reading Koine Greek, which draws heavily on insights from modern linguistics while always remaining very accessible to students. Although many Greek textbooks are little more than a rehash of earlier works, Reading Koine Greek is creative, engaging, and innovative. Students will find using Reading Koine Greek to be like having a master teacher guiding them through the sometimes turbulent waters of learning the language of the New Testament." — Martin Culy, editor, Baylor Handbook on the Greek New Testament Rodney J. Decker (1953-2014) received his ThD from Central Baptist Theological Seminary and served as professor of Greek and New Testament at Baptist Bible Seminary in Pennsylvania. He authored Temporal Deixis of the Greek Verb in the Gospel of Mark with Reference to Verbal Aspect and several major Greek study books, including A Koine Greek Reader and the forthcoming Mark volumes in the Baylor Handbook on the Greek New Testament.
ISBN: 9781493404100