New International Commentary on the New Testament (NICNT): The First Epistle to the Corinthians, Revised 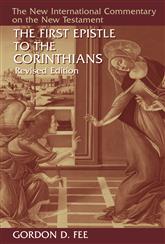 New International Commentary on the New Testament (NICNT): The First Epistle to the Corinthians, Revised

Title: New International Commentary on the New Testament (NICNT): The First Epistle to the Corinthians, Revised

This landmark commentary, originally published in 1987, has been lauded as the best study available of Paul's theologically rich first letter to the Corinthians. Writing primarily for pastors, teachers, and students, Gordon Fee offers a readable exposition of 1 Corinthians that clearly describes the meaning of Paul's ideas and their larger theological relevance.

Fee's revised edition is based on the improved, updated (2011) edition of the NIV, and it takes into account the considerable scholarship on 1 Corinthians over the past twenty-five years. Fee has also eliminated "chapter and verse" language — totally foreign to Paul's first-century letter — relegating the necessary numbers for "finding things" to parentheses.