Works of Jonathan Edwards: Volume 9 - A History of the Work of Redemption - Olive Tree Bible Software

Works of Jonathan Edwards: Volume 9 - A History of the Work of Redemption 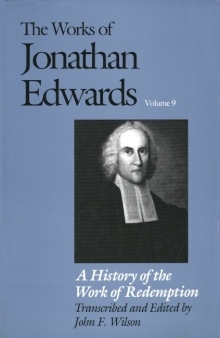 Works of Jonathan Edwards: Volume 9 - A History of the Work of Redemption

Title: Works of Jonathan Edwards: Volume 9 - A History of the Work of Redemption

In 1739 Jonathan Edwards preached a series of thirty sermons in his church at Northampton, Massachusetts—sermons based on one scriptural passage, Isaiah 51:8. Apparently Edwards later intended to develop this discourse into a major treatise construing God’s redemption of the world as the most basic doctrine of theology. Unfortunately, he died before he could undertake this project. The sermon series, however, was later transcribed and then published in Edinburgh in 1774. There were numerous editions in Britain and the United States, and it was enormously influential in popular evangelical circles of the nineteenth century. This edition presents a modern, authoritative text that firmly establishes the place of Work of Redemption in the literary and historical tradition of puritan New England.

The text is based upon a new transcription of the original preaching booklets in which Edwards wrote out his sermons. In this sense, it restores an earlier and more authentic, if less polished, version of the work than the one that was edited and issued after Edwards’ death. As a critical edition it presents Edwards’ Redemption Discourse for the modern reader with appropriate annotations and references.

This volume includes a substantial introduction that places the composition of the sermons in the context of the period and discusses the reception and influence of the many editions of the published version. The introduction also interprets the place of this particular work in Edwards’ thought more generally, de-emphasizing the historical interests he has been alleged to have shown in it and emphasizing instead the ambitious theological program which it represented. Accordingly, this volume presents this major treatise in a fresh light and suggests new lines of inter-connection with other elements of his work.

This volume can be purchased individually, or as part of the following set:
Works of Jonathan Edwards (26 Vols.) John F. Wilson is Agate Brown and George L. Collord Professor of Religion at Princeton University.