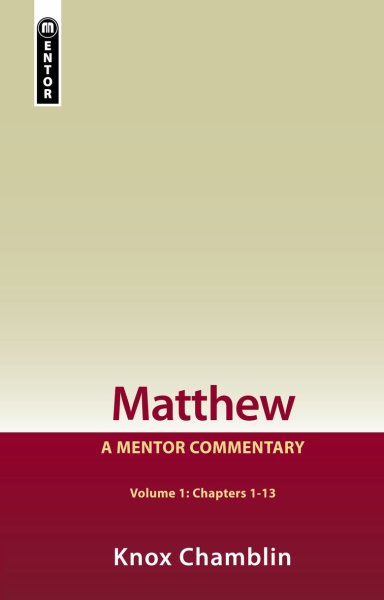 Matthew's Gospel is the first document in the New Testament - a suitable location considering some scholars' opinions (for example, Theodor Zahn and Ernest Renan) that it is the pre-eminent piece of literature in antiquity.

What sort of book is it? Who is its author, and why did he write it? What historical, literary and theological contexts influence it? Matthew's Gospel also tells a story of Jesus, the son of David the son of Abraham - accordingly it gives attention to characters, plot lines, conflicts and resolution - but the extra dimension is that it also has an effect upon its reader to direct them to the Savior of the world.

"My head hurts when I think of how Knox Chamblin weighed and worried over every Greek word or phrase in every sentence of Matthew's Gospel and then has pulled it all together into a lucid and connected whole. And my heart is grateful for a commentary like this--that is thorough (he simply 'milks' the text), clear (both in its organization and in his positions), and 'pushy' (in driving us to worship). Chamblin clearly wants me to understand Matthew and to stand amazed in the presence of Jesus the Nazarene. Knox Chamblin is in vintage form here: relentlessly nailing us to the text and always wobbling on the edge of doxology." Dale Ralph Davis, Minister in Residence, First Presbyterian Church, Columbia, South Carolina

"This thoughtful and thorough commentary on the First Gospel comes from a scholar who has obviously spent many years at the feet of Matthew the teacher, and even more importantly, at the feet of the One to whom Matthew bears witness." — Jonathan T. Pennington, Associate Professor of New Testament Interpretation, The Southern Baptist Theological Seminary, Louisville, Kentucky Knox Chamblin (1935-2012) was ordained to the gospel ministry in 1971. He did graduate work at Cambridge University, and received his Th.D. from Union Theological Seminary in Virginia in 1977. He taught for thirty-four years in Jackson, Mississippi, first at Belhaven College, then at Reformed Theological Seminary until retirement in 2001.